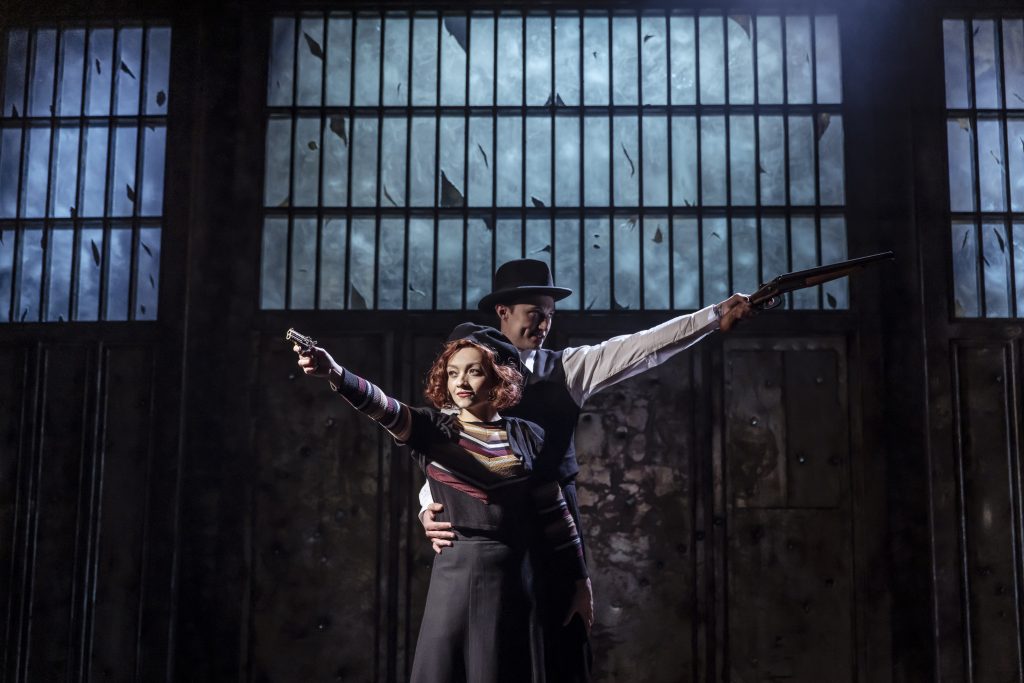 Everybody loves an outlaw. For years, audiences have been transfixed by Bonnie Parker and Clyde Barrow’s illicit romance and descent into criminal notoriety. For the first time, Ivan Menchell, Don Black, and Frank Wildhorn’s musical is enjoying its maiden London run and it’s been a long time coming.

Regularly romanticised, Bonnie and Clyde were famously immortalised in the 1967 movie starring Warren Beatty and Faye Dunaway. The musical made its Broadway debut in 2011 and despite only playing 36 regular performances, the show garnered a devoted fan base. Bonnie and Clyde made its West End debut in the form of two sold out concert performances, starring original Broadway Clyde Jeremy Jordan. The fully staged musical takes up residence in the Arts Theatre for a 13-week run.

It’s 1930, and America is in the depths of the Great Depression. The American Dream is in tatters and life is tough. Enter Clyde Chestnut Barrow (Jordan Luke Gage), a charismatic chancer from the wrong side of the tracks. His life is a foregone conclusion. Born into poverty, he had been in trouble with the law since childhood. Regularly burglarising with his hapless and easily led brother Buck (George Maguire), he had already been in and out of prison several times before he met the plucky and feisty Bonnie Parker (Frances Mayli McCann).

Whilst Clyde’s path in life was arguably predetermined, Bonnie’s was far from set in stone. She had the potential to be something. Despite marrying young, she had a gift for poetry and designs on being a Hollywood star. Bonnie’s fork in the road comes in the form of Clyde, and in falling hard for him, she descends into a life of crime. From the moment she breaks her crooked beau out of jail, her dye is cast.

Frances Mayli McCann returns as Bonnie and delivers a musical theatre masterclass. McCann is a pocket rocket of a performer and embodies Bonnie to utter perfection. Her journey from small-town girl, to one-half of the most notorious criminal pairings in history, is delivered with class and poise. It could be argued that her desperate and passionate love for Clyde forces her down that rabbit hole, but for one to commit such heinous crimes, there must be an inherent urge somewhere within. McCann articulates this perfectly and is effortlessly sophisticated in the role. It’s impossible to discuss McCann’s performance without touching on her incredible vocal prowess. Her performance of the tear-jerking and foreboding ballad ‘Dyin’ Ain’t So Bad’ is truly ethereal.

Jordan Luke Gage is solid as Clyde but at times his incarnation borders on the manic. In fact, there are several parallels with Gage’s run in Heathers as the psychotic and murderous JD. There are definite synergies between the characters and as a result, Clyde feels somewhat whiny and rather unlikeable. It’s nigh on impossible to root for him. That said, Gage’s vocals are a dream, and his performance of ‘Raise A Little Hell’ is sublime.

Through Clyde’s unlikability, it is Bonnie’s childhood friend turned Deputy Sherriff who garners the most sympathy. Cleve September plays the lovelorn law enforcer Ted with palpable and raw emotion, and you just will Bonnie to see the light and ditch the dangerous and unpredictable Clyde.

George Maguire as Clyde’s brother Buck brings some light and shade to proceedings. Buck is morally conflicted and torn between the life of crime he knows and a life of domesticity with his god-fearing wife, Blanche (Natalie McQueen). Maguire is wonderful as Buck and as much as you root for him to do the right thing, the pull of his magnetic brother is just too much.

Maguire and McQueen have wonderful chemistry, and McQueen brings the bulk of the light moments. Her delivery of the toe-tapping number ‘You’re Goin’ Back to Jail’ is truly hilarious, delivered with a delectable whiff of campiness. Again, one of McQueen’s more recent roles (Doralee Rhodes, 9 to 5) trespasses into the performance and there are some similarities in how she plays the role. However, this time it’s not detrimental and serves to make Blanche ballsy, feisty, and deceptively strong-willed.

The wider cast is strong and Bea Ward and Isaac Lancel Watkinson who play the young Bonnie and Clyde are particularly impressive. The ensemble cast plays multiple roles and are worked hard. They deliver Nick Winston’s technical choreography with ease and are slick and classy in their delivery.

The set is simplistic, yet the scene transitions feel a little clunky. Most scenes are also extremely short, which does affect the pace and flow of the piece. That said, the performances make up for any shortfall in this area. Nina Dunn’s video projections add an effective dimension to what would otherwise be a very static set.

On the whole, Bonnie and Clyde is a wonderful piece of theatre, unlike anything currently on offer in the West End. Frank Wildhorn’s score is wonderful, with Don Black’s lyrics truly packing a punch. The book is incredibly tight, with a delicious (and true) core story.

It would be a crime if this show doesn’t get a longer run and a longer West End life and the show deserves to raise a lot more hell.

Beg, steal, or borrow a ticket. Just don’t take a leaf out of Bonnie and Clyde’s book and hold up the box office!