REVIEW: Bennett’s words linger long after the final bow, leaving the audience with food for thought 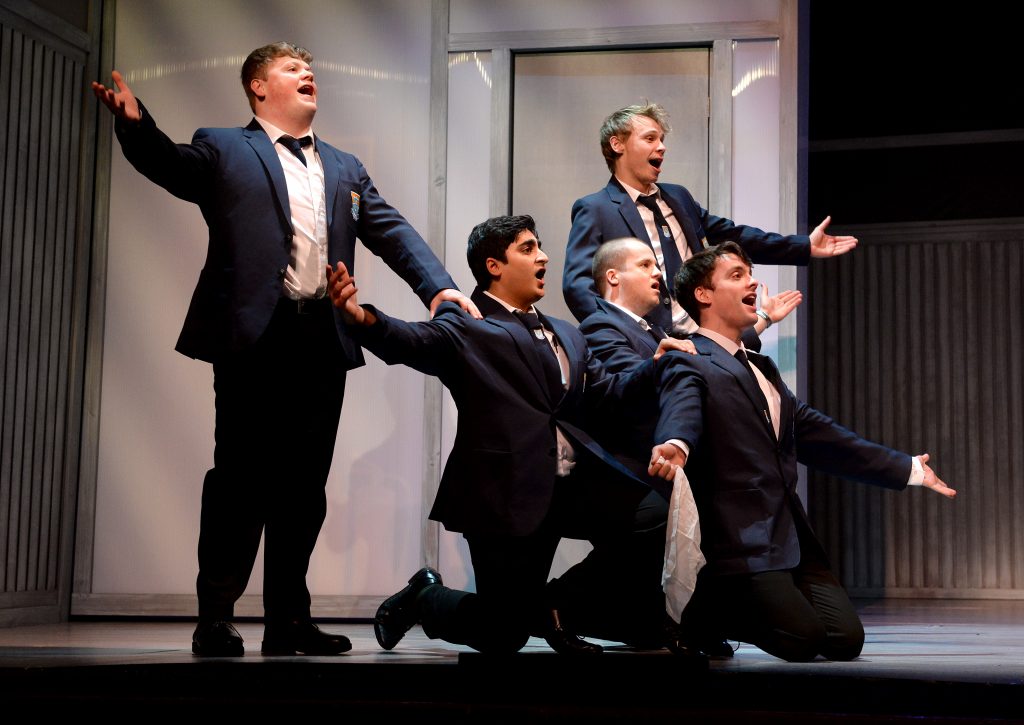 The History Boys is perhaps Alan Bennett’s most renowned plays. This classroom comedy-drama launched the careers of many household names during its 2004 premiere at the National Theatre as did the film adaptation (directed by the National’s own Nicolas Hynter), and has become a firm favourite in the theatre world. Wolverhampton Grand Theatre has gripped this classic play firmly and produced a ray of light on this popular West Midlands stage, being the theatre’s third in-house production since 2017.

Set in the 80s – although, by Alan Bennett’s own admission, the play could slip easily into a modern era – The History Boys tells the tale of 8 young adults lusting after an escape from their South Yorkshire roots to the height of academia. Their combined goal post-sixth form is simple: Oxbridge. The students spend the length of the play under the tutelage of Hector (Ian Redford) and Irwin (Lee Comley): two outstanding teachers with very different teaching styles. Hector is a lover of literature for literature’s sake, with Irwin being hired by the school to get their boys into his Alma Mater.

Redford commands the stage. His scenes demand attention from the audience and his characterisation of Hector is superb. His teaching methods are a memory of those the audience has seen in days gone by – teaching for the love of the material (although perhaps not inspiring to the group of upper sixth). In contrast, Comley’s portrayal of newly qualified Irwin blooms through the play. As his confidence around the boys grows, as does his stage presence. Act one and act two are stark contrasts with his metamorphosis from a coach to a well-loved teacher.

Jordan Scowen plays a confident Dakin. His charm quickly wins the affection of Irwin, although his teacher keeps him at arm’s length through the story. Dakin is perhaps the most advanced of his peers, and it’s no wonder he’s the ringleader.

Posner (Thomas Grant) is another character who falls for Dakin’s charms. Being the youngest of the boys, he still has a lot to learn. Grant’s voice stuns the audience into silence and plays the challenge of such an explorative role with ease. While he is not the only character who must come to terms with his own sexuality, he is perhaps the one who achieves this with the most heart. And definitely the most wit.

Each member of the ensemble has their own spectacular qualities. Not one member misses a beat, and the cast’s chemistry is clear. They mull over Bennett’s words before delivering them with panache. Seeing this version of The History Boys makes it oh so clear as to why the original run at the National was such a success.

Directed by Jack Ryder (most notably of EastEnders fame, although most recently for directing The Band), The History Boys is a smashing success at Wolverhampton Grand Theatre. John Brooking’s set design is simple yet easy to manoeuvre into the ever-changing classroom scenes. It would be too easy for the set to change around the boys, but with the constant movement of the staging, the set stays fresh. To complement the minimal set changes between scenes, an 80s soundtrack screams nostalgia. It’s glorious!

The History Boys is a triumph, and a total dream from start to finish. Bennett’s words linger long after the final bow and leaves the audience with food for thought. There’s even lust for a second visit.