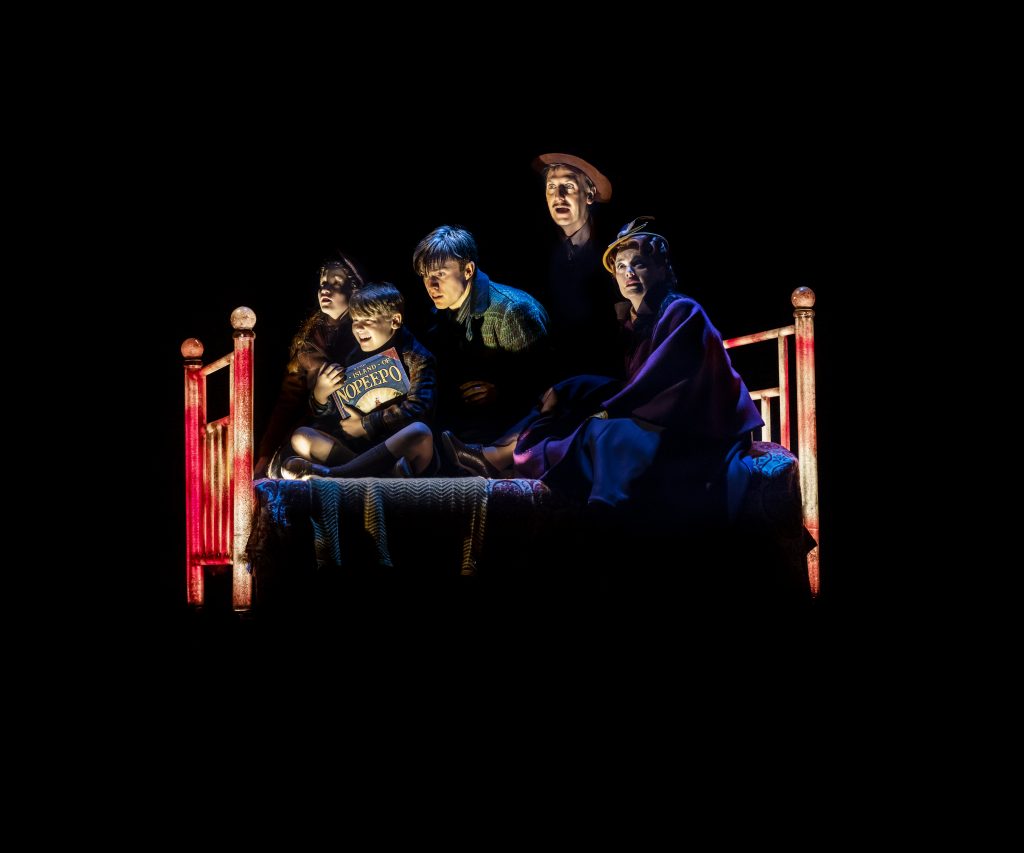 For adults of a certain age, the words treguna mekoides trecorum satis dee are synonymous with their childhood. For many, along with Disney’s first live-action and animation hybrid, Mary Poppins; Bedknobs and Broomsticks holds a special place in their hearts. For the first time, the beloved film has been adapted for stage and is currently delighting audiences, both old and new, as it makes its way across the UK.

Set against the backdrop of World War Two in the seaside town of Pepperinge Eye, Bedknobs and Broomsticks centres around apprentice witch Eglantine Price (Dianne Pilkington). Miss Price’s ambitions of graduating from the Correspondence College of Witchcraft are almost thwarted by the appearance of three evacuees. Cottoning onto her witchery, the Rawlins children help Miss Price track down illusive Headmaster Emelius Browne, who closed the school before furnishing Miss Price with the final Substitutiary Locomotion spell. Cue a magical and fantastical tale of flying beds, magical knobs, talking animals and unlikely heroes.

Produced by Michael Harrison the musical stays largely true to its origins, fleshing out the characters backstories. It features the original songs by the Sherman brothers, along with some new music and lyrics from Neil Bartram and book by Brian Hill. Whilst the new numbers are in keeping with the piece, it’s the old classics that shine. Portobello Road is a gorgeous full company number, packed full of energy.

Dianne Pilkington is a classy incantation of Miss Price. It’s impossible not to draw comparisons with the incomparable Angela Lansbury, but thanks to Pilkington’s outstanding performance that comparison is fleeting. Her interpretation of Eglantine is delightful, and there is no attempt to replicate Lansbury. Instead, Pilkington succeeds in making the role truly her own. Her portrayal is no-nonsense, and her irritation at being lumbered with the evacuees soon turns to affection. Her take provides a modern twist whilst still retaining the classic components of the iconic character. She also makes what is obviously an incredibly technical and physical role look effortless.

Charles Brunton steps into the role of Eglantine’s reluctant mentor turned love interest Emelius Browne, and in the main, delivers a solid turn. The new book has tweaked the personality of Mr Browne making him rather less charming and somewhat wilted. Gone is the gumption and pizazz of the original, replaced with uncertainty and reluctance. Bruton delivers his (new) solo Emelius The Great flawlessly and is vocally on point.

The younger Rawlins siblings Carrie and Paul are played by several actors during the tour. For this performance, Poppy Houghton and Dexter Barry are in residence. It was a real shame to see Carrie’s role somewhat demoted in favour of her brothers, which allowed Houghton fewer chances to shine. That said, the pair did a wonderful job, with Barry delivering a cheeky and endearing performance as Paul. Mountview graduate Conor O’Hara takes up the role of the eldest Rawlins sibling, Charlie. Nobody can deny his energy and commitment, but he clearly doesn’t pass for a 13-year-old. Casting gripe aside, O’Hara delivers arguably the most memorable of the new numbers, Negotiality. It’s an assured and polished professional debut.

The wider cast is small but incredibly slick and hard-working. Not only do they seamlessly deliver Neil Bettles movement and choreography with unwavering energy and commitment, but they also juggle multiple props with apparent ease. The staging and props are as complex as they are plentiful, and the cast moves around the stage with dexterity and pace. Rob Madge delivers an enchanting turn as Norton, A Fish, and they are an animated and vivacious member of the company.

Disney always pulls out the stops when it comes to special effects. Jamie Harrison has created theatrical magic and the tricks and illusions are a delight, there is still a bit of refining needed, but no doubt this will be ironed out as the tour progresses. The bed is of course the centrepiece and does not disappoint, given the Aladdin flying carpet treatment it takes flight on numerous occasions creating a magical spectacle. Gabriella Slade’s costume design is at times Ozonian, complimenting the narrative and adding to the overall impact of the piece.

This production of Bedknobs and Broomsticks is far from a carbon copy of its film original, and many a tweak has been done to aid its transition to the stage. Those who hold the film close to their heart may need a moment to take these in, but ultimately the changes work for the better. The show is in its infancy and will undoubtedly be honed and toned as it continues its tour. The production is bold, effervescent, and joyous escapism.