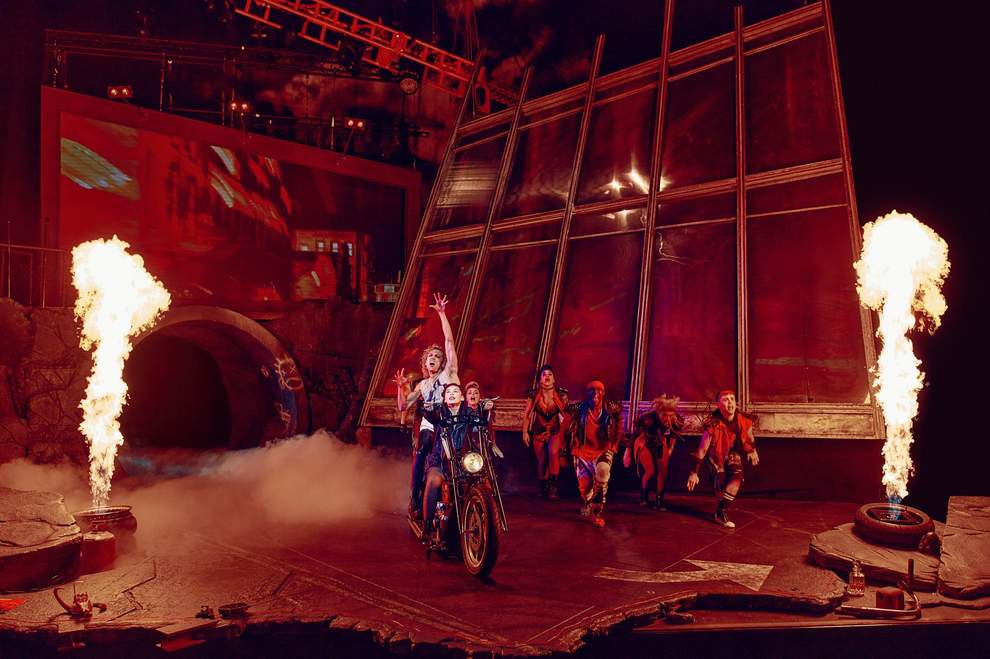 Glenn Adamson as Strat, Martha Kirby as Raven and the cast of Bat Out Of Hell. Photo: Chris Davis Studio

Jukebox musicals are uniquely placed in the world of theatre. Purists tend to look down on them, while fans of the creators/performers of the original songs will attend in their droves, despite often not being regular theatre visitors. Then there are those who buy tickets, and during their outing will happily smile, dance in their seats, mouth the words (or sing along even if discouraged from doing so!), and will walk away feeling like they’ve had a great night out. Fortunately, the audience of this opening night performance of Bat Out of Hell at the Milton Keynes Theatre seemed to be entirely made up of the latter two options.

The creative team has done a stellar job. Lighting is excellent and helps set the mood, props and costumes are wonderful, the set is simple but well-executed and fitting for the show, and the use of an on-stage camcorder operator and multiple live projection screens is clever, albeit a bit distracting on occasion. Then however, comes the biggest potential let-down. Sadly there’s no getting around it, the storyline used to illustrate and drive the show is pretty confusing, and at times even seems to be a little forgotten. The first act was a bit disjointed, and (as a result of trying to set the hard-to-follow narrative) felt a tad slow. The second half was almost entirely songs – not necessarily a negative in this case – but came across almost like it was rushing to get to a conclusion. This again made it difficult to entirely understand the progression, but that isn’t something uncommon in jukebox musicals, and thankfully can mostly be forgiven due to the quality of the performances of the many songs featured in (if sometimes shoehorned into) this musical.

The original 1977 Meat Loaf album that it shares its name with was a huge hit, selling over 40 million copies worldwide to date, and as a result, the tracks created by both Meat Loaf and Jim Steinman (also the writer, composer, and lyricist for this show) are beloved by many. That is clearly apparent when attending a performance, as every time a new tune kicked off there were nudges, whispers, and obvious positive reactions from the majority of those attending when recognising a famous song. And those songs, or more accurately the presentations of them and the stunning performers responsible, are the reason to go and see this show, or (if one was feeling mean) what saves it from being mediocre.

Glenn Adamson as leading man Strat is sensational. A superb singer whose vocals are only surpassed by his own energy and immersion into the role; he really oozes confidence and stage presence. Opposite him is Martha Kirby as Raven who has an equally brilliant voice (particularly apparent in the second act when she really gets to strut her stuff!) The opening performance at Milton Keynes had understudies in the roles of Falco and Sloane, Jamie Jukes and Laura Johnson respectively, and they too were fantastic – both vocally (especially Johnson who has a truly enviable range) and in their highly entertaining and frequently hilarious characterisation. Joelle Moses as Zahara similarly deserves a mention as her powerful singing and confident performance is a joy to watch, and the same is to be said for her counterpart/compadre Jagwire, played by the talented James Chisolm. And although the aforementioned six are incredible, that isn’t to say the rest of the cast aren’t – they simply have less opportunity to show off their solo skills. And whether it’s the immense vocals or the outstanding movement, the whole ensemble really are amazing, as are the jaw-droppingly good band, conducted magnificently by Iestyn Griffiths.

So mixed feelings here really. Bat Out of Hell is certainly a great night out for all those who enjoy a Meat Loaf hit, and for anyone who loves to see some exceptional performers doing what they do best. Anyone expecting or hoping for a riveting and cleverly composed storyline will be disappointed, BUT, only if they won’t allow themselves to forgive that “minor” faux pas and focus on being thoroughly entertained by an enormously talented cast and band.