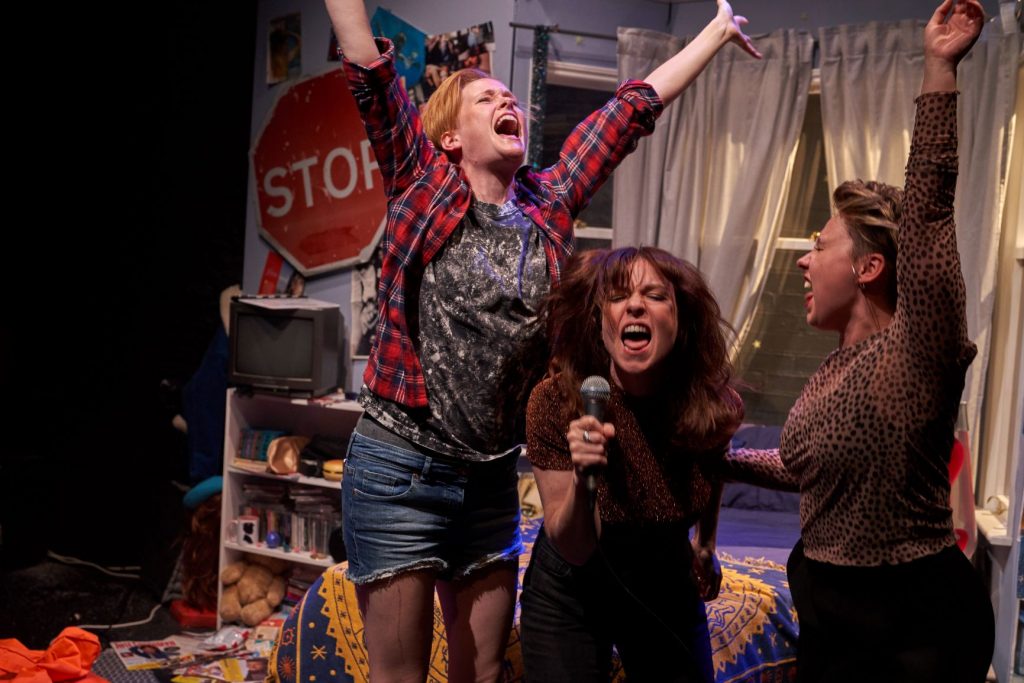 Ask Me Anything – Production Image: Contributed

As the show begins, Ask Me Anything is posed as a conversation, establishing that the company is here to do more than just tell a story. After receiving over 100 letters from teenagers across the UK, inviting them to share their own questions, confusions, and thoughts, the inventive Paper Birds theatre company devised this single-act production as their collective response. Combining live music, funny skits, and digital magic, the show astutely ponders the universal experiences of youth across generations.

In exploring the questions of the letters, the three performers themselves open up and reveal their own personal truths. They introduce themselves by their real names and quite literally invite the audience into their teenage bedrooms, re-created on stage to evoke the aesthetics of their adolescence in the 90s and 00s. The warmth and openness of the setting – which invites the audience closer to the show through immersive bean-bag seating in front of the stage – is reflected in the performers, who each shine in playing to their respective elements and experiences.

The youngest, Georgie Coles, tries to find meaning through dramatic readings of her own teenage diaries with hilarious results that speak to the complex and difficult relationships we have with our parents. On the other side of the stage, 90s kid, Kylie Perry, filters questions about relationships and sex – the most common inquiry asked in the letters – through re-creating her adolescence as a cheesy 90s sitcom, prompting the audience to provide laugh tracks and become extras in a party scene.

The third cast member, musician, Rosie Doonan makes no secret of not considering herself an actress, instead, exploring questions of motherhood and parenting through a series of touching songs. A song of advice to her two-year-old son is particularly moving, with Doonan’s gorgeous voice soaring as she ponders the lessons she hopes she can teach him. Music manifests throughout the show, all written by Doonan using the letters as inspiration while pulling from other genres and styles as influenced by Perry and Coles’s tastes to create a range of engaging group numbers.

Bridging the gap between their own experiences and today’s generation are the digital interfaces scattered above and around the stage, controlled by a Siri-esque avatar. While the jokes of this avatar don’t always land, its most pertinent use is to shine a spotlight on marginalised voices. Wisely, the trio themselves don’t address issues they don’t have a lived-in knowledge of themselves, allowing video footage of friends who do to discuss race, sexuality and same-sex parenting. It’s indicative of the empathy and thoughtfulness the show seeks to impart, making the conversation at its heart nicely inclusive.

With all these moving parts the show risks becoming disjointed, yet it progresses with ease, being able to eventually address more serious issues of youth suicide and depression in a sincere manner that reflects the impossibility of coming up with an easy answer.

Communication is ultimately the driving force behind everything the show presents, preaching for the importance of having an open forum to do so in. The sincerity of the performers and the material makes Ask Me Anything an eclectic, funny and earnest place for communication to thrive in, where you might not find an answer to your woes, but you will find a life-affirming piece of theatre.