REVIEW: Anyone Can Whistle – a rollicking & riotous musical comedy 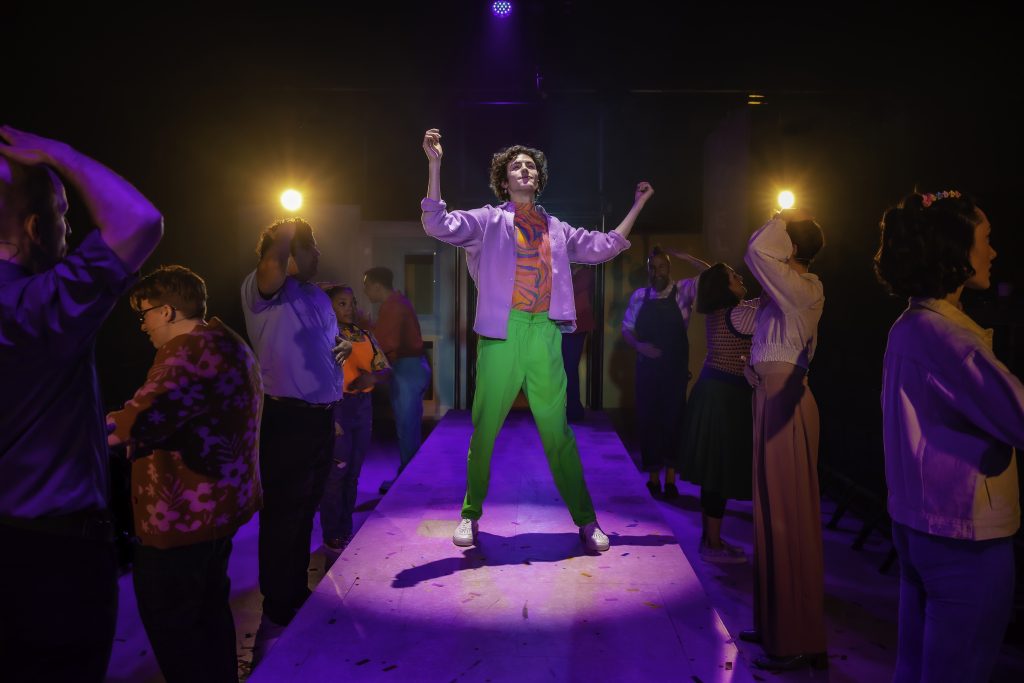 In an oeuvre of musical theatre as filled with treasured jewels as Stephen Sondheim’s, Anyone Can Whistle is a dusty gem usually left unpolished. It has scarcely been staged since its initial flop on Broadway in 1964, with its most notable revivals being limited to concert presentations. Lucky for us, this new production at the Southwark Playhouse has finally set about polishing this gem. The result is a rollicking and riotous musical comedy that proves the show as something worth rediscovering.

Sondheim once suggested Anyone Can Whistle could be considered an early absurdist musical, which is evident from any attempt to describe its plot. Perhaps overly satisfied with its cleverness, the show aspires to be a socio-political satire through the story of a bankrupt town known only for its ‘Cookie Jar’ mental asylum that punishes non-conformist citizens (‘cookies’) and whose mayor, Cora Hoover Hooper (Alex Young) is hell-bent on maintaining her power by any means. These means end up being by manufacturing a miracle in the form of a water-spouting rock, which eventually brings chaos upon the town when suspicions are raised, the ‘cookies’ are released, and a new-in-town doctor induces a town frenzy.

If to quote Sondheim, he and book writer, Arthur Laurents wrote it as if “they were the two smartest kids in the class”, then this production lets the rest of the school in on the joke and goads them to revel in its madness. The stage set-up of a central strip flanked by audiences on opposite sides is the perfect layout for this purpose, allowing the show’s satire to shine through. The audience becomes features of the ensemble in several key moments that emphasise the absurdity of attempting to homogenise a society, while Young getting to have a bit of good-natured fun with a few audience subjects is only an added bonus. Sadly, some subtleties to the show’s humour are surely lost due to the somewhat weak sound mix in the more complex numbers that drowns out portions of the lyrics.

Alex Young crafts a genius comic creation out of Cora, finding laughs with the delivery of a single word while belting her numbers with a giddily evil charm. She sets the tone for an excellent cast that is off the rails with energy from the opening number, playing into the show’s absurdity with glee. In particular, she and her chief schemer, Comptroller Schub (Danny Lane) make for a deliciously malicious duo. Even the show’s calm in the storm, town nurse, Fay Apple (Chrystine Symone), lets loose and delivers a sultry burlesque pastiche whilst pretending to be a French seductress in pastel pinks and a huge wig. Director, Georgie Rankcom, does not stray from revelling in the inherent silliness of the musical, and it is this which is the production’s biggest strength. In particular, a ballet of recapturing ‘cookies’ is comedic gold that is wonderfully choreographed by Lisa Stevens.

The original text ultimately leaves a few too many plates spinning for this production to keep up, damned though they try. One senses the romance between Fay and Hapgood (a goofy and gorgeous-sounding Jordan Broatch) feels a little perfunctory in amongst the fun, though it does provide a solid springboard for Fay’s character arc that Symone carries beautifully. It is this arc through which Rankcom and their team have teased out themes in Anyone Can Whistle that were well ahead of their time. The so-called mental patients are in fact just happy individuals refusing to conform, which Fay eventually learns to embrace in herself.

These layers, along with the raucous fun, are what make this musical a worthwhile one, despite the messiness inherent to the text. The miracles in the plot may be fake, but this production makes a real miracle of its own.

Runs until: Saturday 07 May