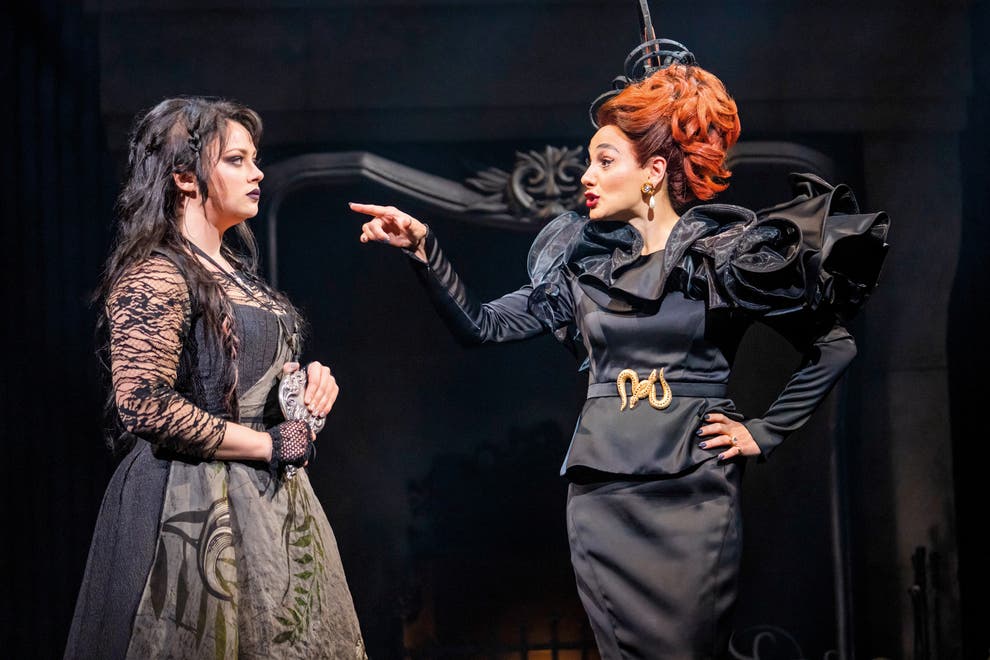 It’s been six years since a new musical featuring the compositions of Andrew Lloyd Webber has graced the West End. Andrew Lloyd Webber’s Cinderella has been hotly anticipated since its workshop at The Other Palace in 2019, featuring Carrie Hope Fletcher who has remained in the title role in its iteration at the Gillian Lynne Theatre. After multiple delays, thanks to the COVID-19 Pandemic, Cinderella is finally firmly on its legs and ready to dazzle audiences.

Cinderella takes the well-loved fairy tale to a dark place, thanks to the pen of Oscar winner Emerald Fennell, with a gothic Cinderella wreaking havoc on the town of Belleville by vandalising. Belleville’s beloved prince and heir to the throne has disappeared, meaning his brother Sebastian must take the reins. Sebastian and Cinderella are childhood best friends who both harbour feelings for one another. But after Cinderella’s vandalism in the opening act, Sebastian is forced to marry in order to bring money into the town through tourism following a royal wedding. After Cinderella believes Sebastian wants a beautiful bride, she sees The Godmother in her dress shop.

The take on the traditional story is fun. It’s interesting seeing Cinderella as a loveable rogue as opposed to the usual sickly-sweet character we’ve come to know both in the Disney iteration of the tale and Rodgers and Hammerstein’s stage show. Cinderella features a book full of double-entendres and adult humour, and a much darker reinvention of our title character prior to the ball. Perhaps a little unsuitable for the younger audience that the product is sure to draw in, and fairly unnecessary. It works brilliantly, but audience discretion should be advised.

Carrie Hope Fletcher has been a powerhouse for a number of years, and her most recent role as Fantine in Les Misérables was given rave reviews. It was going to be tough to match, but Fletcher surpasses any expectation on her shoulders as Cinderella. Her vocals are strong and her performance is flawless, in particular, her performances of ‘Bad Cinderella’ and ‘I Know I Have A Heart’.

Both Victoria Hamilton-Barritt and Rebecca Trehearn as the Stepmother and the Queen respectively are a divine double act. Their comedic timing and stage presence is a masterclass for all aspiring artists. Their duet in act one is surely a crowd-pleaser for the older members of the audience. Gloria Ontiri is grievously underused as The Godmother in an assertive, bordering on evil portrayal of the character. For such a key role in historic interpretations of the tale, The Godmother features in just one song during the first act and barely appears at all in the second act to the point where the character feels almost redundant. Equally underused are Laura Baldwin and Georgina Castle as the not-so-ugly step-sisters. Perhaps another number for the two of them is just what the show requires.

The creative team in Cinderella have a wealth of accolades and awards between them, but does the show live up to the expectation on paper? It tries but falls slightly flat. Not to say that the production isn’t well worth a visit, but with all the press surrounding the show’s false starts, it is easy to have expected a lot more.

In classic Lloyd Webber style, there are reprises for almost every single song which by the middle of the second act grates just slightly. Joann M Hunter’s choreography is nothing spectacular. The ensemble cast has a wealth of theatre experience between them and this just isn’t obvious watching the simplistic dance routines.

In contrast to the disappointing movement of the cast, the movement of the set is a sight to behold. What begins as a simple set wows in the second act. The lighting design by Bruno Poet is gorgeous, particularly during the latter stages of the first act and throughout act two, with plenty of LEDs lighting up all aspects of the set.

Overall, Andrew Lloyd Webber’s Cinderella is a fun show that certainly isn’t for all ages. It’s dark, but it’s funny and worth a visit just for the dream that is Carrie Hope Fletcher’s mezzo vocal performance. She is a gift to the Gillian Lynne Theatre after a rough 18 months for the industry.