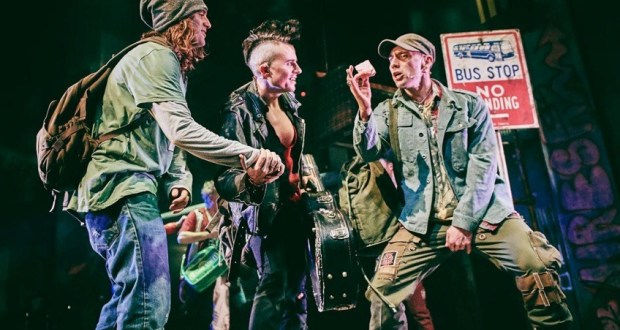 Green Day‘s explosive rock musical American Idiot is back in Birmingham as it celebrates its 10th anniversary and also the 15th anniversary of the influential, Grammy-award winning concept album on which it is based.

Winner of two Tony Awards, American Idiot tells the story of three disillusioned boyhood friends who struggle to find purpose in a world that is both tumultuous and cruel. Set in the wake of 9/11, the musical charts the young men’s struggle to shake off the restrictions that bind them to their stifling lives and the ultimate paths they take.

With many jukebox musicals, the strength of the plot can be sacrificed in order to shoe-horn in as many hits as possible; unfortunately, American Idiot is guilty of joining this trope.  The plot is thin and messy, allowing very little room for proper character development making it very difficult to properly empathise or connect with the characters. The main issue comes from the lack of dialogue; the success of a sung-through musical relies on the narrative being clearly translated through the strength of the numbers. At times it is hard to decipher the lyrics which is detrimental to the flow making it nigh-on impossible to keep up with the characters’ motivations.

Despite its shortcomings, American Idiot goes some way to redeeming itself through the incredibly strong performances of the cast. They make the best of the material they have to work with, namely Green Day’s iconic punk-rock back catalogue. Tom Milner’s portrayal of the conflicted Johnny is outstanding. He completely embodies the character delivering a performance with total commitment and no half measures. Of the three friends, his journey is the most shocking and extreme, making it painful and uncomfortable to watch him unravel. Vocally he is strong, performing the high energy, rock numbers with authority.

Luke Friend’s journey to the stage has been less traditional than his contemporaries having risen to fame on The X Factor. He produces a strong performance as Johnny’s villainous and maniacal drug-dealing alter-ego, St Jimmy. For those familiar with the album, the link between the two characters is clear. However, for someone new to the concept of the album, the connection between the two characters remains ambiguous until late on. Despite his vocals not being as polished or refined as his co-stars, Friend delivers an edgy, demonic performance in a rôle in which he clearly revels.

The narrative largely labours on the feelings and journeys of the male characters with the women relegated to bit parts to facilitate the arc of the show. That said, another X Factor alumna, Sam Lavery delivers an astonishing turn as Whatshername, performing her solo Letterbomb with incredible energy. It is a shame that the part is so underwritten as her performance is one of the standouts of the show.

The wider ensemble is strong, executing Racky Plews’ chaotic, fast-paced and exhausting choreography beautifully. The muscular Joshua Dowen perfectly combines physical strength with a strong vocal performance as Tunny with Samuel Pope both convincing and believable as the immature and reluctant father Will.

A combination of clever lighting and set design creates a dystopian underground, which is staged over two levels with a live band above the stage.  The band creates a rock concert ambience, which in the main adds to the atmospheric delivery of the soundtrack but they do at times drown out the vocals; on balance, they do incredible justice to the iconic soundtrack.

Despite being released ten years ago, the themes that weave themselves through the narrative of American Idiot are never more relevant than they are today. In a climate of political uncertainty, widespread intolerance and oppression, the angst, anger and frustration channelled through Billie Joe Armstrong’s lyrics could not be more appropriate.

This show is not for the fainthearted. American Idiot goes from extreme sensory deprivation to extreme sensory overload in a flash. It is chaotic, frantic and thunderous and makes no apologies for it. Fans of Green Day will be happy, more traditional theatre-goers, arguably, less so.