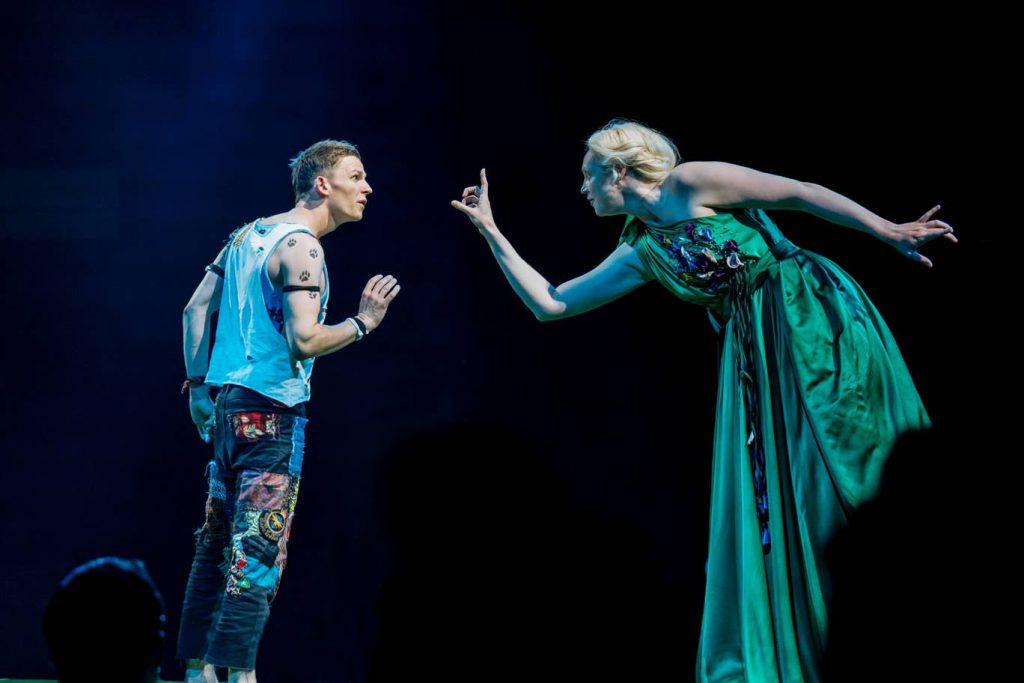 The round of the Bridge Theatre becomes the forest in Nicholas Hytner’s immersive reimagining of Shakespeare’s most famous comedy, A Midsummer Night’s Dream. Following the success of last year’s immersive masterpiece of Julius Caesar, the creative team have reunited to bring a fresh and modern adaption to an eager London audience.

We open in the austere and spartan Athenian court, the staging of which looks more Margaret Atwood than William Shakespeare. The parallels with Atwood’s Handmaid’s Tale are undeniable as Hippolyta; Queen of the Amazons (Gwendoline Christie) stands in a Perspex box, embittered as she awaits her forced marriage to Theseus, Duke of Athens (Oliver Chris). The scene is drab, the costumes more so, with Hippolyta looking more like she is off to a nunnery than her own wedding. Meanwhile there is a love quadrangle unfolding in the form of Hermia (Isis Hainsworth) who is being forced to marry Demetrius (Paul Adeyefa) but is in love with Lysander (Kit Young), while her best friend Helena (Tessa Bonham Jones) pines unrequitedly for Demetrius. This begrimed scene makes the transference to the hallucinogenic forest all the more contrasting when the audience are finally transported.

The creative’s have come together to create a truly stunning piece of theatre. Through Nicholas Hytner’s inventive and imaginative direction, Bunny Christie’s intricate and multi-levelled stage design is brought to life. Arlene Phillips’ movement is mesmerising, acrobatic fairies trapeze from silks hanging from the ceiling where they nimbly and expertly execute complex and daring choreography.

In the beautifully crafted parallel plot-line Oberon, King of the Fairies and his Queen Titania are introduced as the theatre is transformed into the “dream world of flying fairies, contagious fogs and moonlight revels”. This production flips the very conventions we are used to, with the Fairy King Oberon, rather than his wife Titania falling for the Ass Bottom, the production is joyously queer and a celebration of love in all its forms.

Game of Thrones alum Gwendoline Christie is a joy in her dual role of Hippolyta/Titania and commands the stage beautifully. Christie brings a manipulative yet charming quality to the Fairy Queen and clearly revels in the role. She is complemented in droves by the twitching, rascally Puck with David Moorst producing an astounding turn as the spritely fairy who literally immerses himself amongst the enchanted pit spectators as he makes his way around the space.

Oliver Chris is a delight as the Fairy King Oberon and transforms into the ultimate lovesick fool once Puck’s love juice makes its appearance. His movements are exaggerated and his comic timing is second to none as he floats around the stage. However, it is during his interactions with the object of his affections, Bottom where he truly comes into his own. Speaking of Bottom, Hammed Animashaun is nothing short of a revelation. There are simply not enough superlatives to describe just how outstanding his performance is. Engaging, delightful and wildly entertaining, he is a wonderfully accomplished performer who completely embodies Bottom truly making the character his own.

Bottom’s cohorts, The Rude Mechanicals are a riot, and breathe new life into the amateur dramatic group. The casting here is beautifully gender and colour blind. Felicity Montagu takes on the traditionally male role of Quince, her performance is dry and hilarious as she tries to manage the larger-than-life Bottom. Indeed, all members of the group bring pure joy to proceedings, their chemistry as a group is authentic and between them they create some of the most comedic performances of the night.

Nicholas Hytner has created something incredibly special, arguably surpassing the standards and quality of his production of Julius Cesar. He has taken shameless liberties with the original text, switched things up and flipped them on their head. Not only is this production hugely accessible, it is incredibly entertaining and infectious, it’s modern yet sensitive to its source.

Set against a soundtrack of Beyoncé and Dizzee Rascal, The Bridge Theatre’s A Midsummer Night’s Dream is a party that you never want to leave. Best taken in from the immersive pit with no preconceptions, expectations or prior knowledge, it’s a feast for the eyes, ears and heart. Phenomenal ensemble theatre at its finest.