REVIEW: 9 to 5 the Musical – Tumble outta bed and book a ticket… 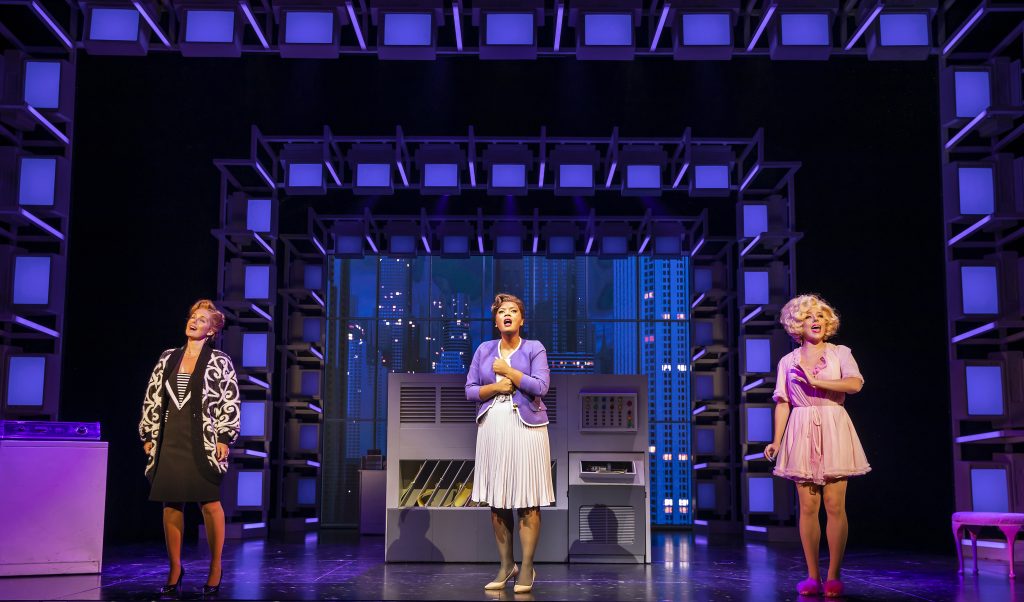 Dolly Parton’s ultimate feel-good musical hits Aylesbury Waterside theatre this week. A musical with big hair and even bigger belts, 9 to 5 is an uplifting and rip-roaring romp packed full of female empowerment and ballsy women. The country legend’s musical style is all over this big, bold, and brassy production, which is pure joy from beginning to end; Dolly even gets in on the action as she bookends proceedings, setting the scene and introducing the characters.

9 to 5 The Musical is based on the 1980 film starring Jane Fonda, Lily Tomlin, and Dolly herself. The musical follows much the same plot and revolves around an unlikely trio of women who bond over their resentment for their sexist, bigoted, and egotistical boss Franklin Hart Junior. Although the piece is stylised as very much tongue-in-cheek, it does serve to highlight the established inequalities between men and women in the workplace and the desire and drive of strong women to challenge the status quo.

9 to 5 The Musical is fast-paced, and the tour cast is wonderfully strong, highly accomplished and the slick ensemble tear through the opening number of the iconic 9 to 5 truly setting the mood. Stepping back into her role from the last tour and West End run,  Louise Redknapp is the ambitious and regularly overlooked office supervisor Violet Newstead. Redknapp brings authority and class to the exasperated Violet but at times her performance does feel somewhat lacklustre in comparison to the wider cast. That said, her vocals and movement are largely on point and despite the slight dip in energy, she manages to hold her own in the role that glues the narrative together.

Stephanie Chandos takes up the role of Dolly’s character Doralee Rhodes. Chandos plays homage to the character’s origins, as well as adding her own flair and individuality to the endearing secretary. Vocally accomplished, she brings a warm vulnerability to Doralee who is ostracised by her colleagues, thanks to Hart’s inference that they are having an affair. Chandos’ emotional and raw performance of Backwards Barbie is one of the highlights of the first act and is delivered beautifully. Her sensitivity to the character is balanced perfectly with the comedic elements of the role.

The trio is completed by Vivian Panka, as the timid, divorcee Judy Bernly recently left high and dry by her cheating husband, (the appropriately named Dick). Panka’s commitment to the role of Judy is a delight; her journey from fish-out-of-water to a sassy and assured independent woman is wonderful. Without a doubt, the show’s standout moment is her solo of Get Out and Stay Out which has the ultimate wow factor, is note-perfect and earns her rapturous applause. Panka is nothing short of inspired casting and is the standout of this talented cast.

Sean Needham brings comedic style and swagger to proceedings as the misogynistic boss, Franklin Hart Junior. Horribly chauvinistic he cracks sexist jokes left right and centre, but thanks to Needham’s delivery he gets away with it. Performers with less of a comedic flair would likely not. You can see that Needham revels in the role of Hart and he is utterly hilarious.

Tom Rogers’ sliding set design works in the main, save from a few cumbersome transitions, and the ensemble works incredibly hard to move the set around at speed. Nina Dunn’s video design brings a slightly modern twist to proceedings, adding to the visual appeal of the piece with a vibrant backdrop that complements the look and feel of the staging.

If you are looking for an evening of escapism at the theatre, then look no further than 9 to 5 The Musical. The show has nailed the magical musical formula, a strong, committed cast, a great score full of classics, and comedy that beautifully delivers a serious message.

What are you waiting for? Tumble outta bed and book a ticket…