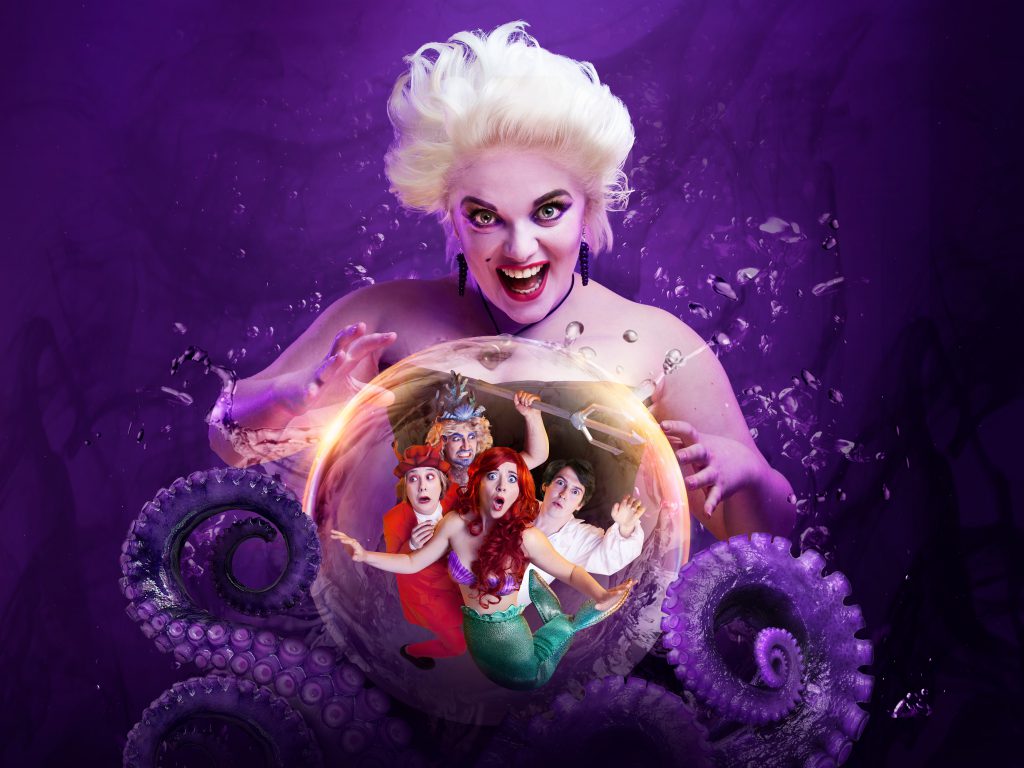 Disney villain. Octo-woman. Plus-size icon. But who is the woman behind the tentacles? Following a complete sell-out run at the 2019 Edinburgh Fringe Festival and from the multi-award winning Fat Rascal Theatre, Unfortunate: the untold story of Ursula the Sea Witch will come to Birmingham Hippodrome’s Patrick Studio from Monday 16 – Sunday 22 December 2019.

Tickets are now on sale to Birmingham Hippodrome Friends and Patron scheme members with tickets on general sale from 1pm, Wednesday 4 September.

It’s time to take the plunge as Fat Rascal Theatre reveal what really happened under the sea, in a tell-all tale of sex, sorcery and suckers. When Disney released ‘The Little Mermaid’ in 1989, they had no idea they were also giving birth to an icon. Despite having just one song and only a handful of scenes, Ursula the Sea Witch quickly took her place as the queen of Disney villains: a bad bitch, a pop culture legend, and an endless source of quotes, memes, and merchandise. She’s the toast of the film, and yet she’s woefully underused.

So who better to take us on a scorching trip through the problematic minefield that is Disney? Much of what makes Ursula a ‘villain’ is also what makes her a feminist badass. She’s loud. She’s clever. She’s a ruthless businesswoman, and oh boy is she sexy. Sexy, and unapologetically fat. Even now, in 2019, where posters still demand that we are ‘beach body ready’ and plus-size models remain a controversial topic; where young women are raised on a diet of lithe and limby princesses, fairies and (yes) mermaids; where disproportionately sized heads and miniature waists are the animated norm… a woman like Ursula is needed more than ever. She’s not defined by slipper-sized feet, or enchanted blonde hair, or snow white skin. Ursula is plump, purple and proud.

With her character design based on the outlandish drag queen Divine, and brought to life by gay lyricist Howard Ashman, Ursula has become a major icon for the LGBTQ+ community, too. A community still woefully underrepresented by Disney, thrown only the occasional veiled hint or (most recently, in Beauty and the Beast) a two second scrap of dancing. But, once again, there stands Ursula, defiant against her creator and with a message for all us ‘poor unfortunate souls’: love the skin you’re in, value your voice over your body, and don’t be afraid to be a little bit nasty.

Fat Rascal Theatre are a creative team packed to the brim with the plus size, the gay and the fabulous: and they’re ready to give Ursula the story she deserves. In this parody remix of the classic tale, Ursula spills the ink and tells audiences what really happened beneath the waves. We’ll see how she dealt with the embodiment of toxic masculinity that is King Triton, and tried to teach his airhead daughter, Ariel, to treasure her voice. Our hero is rude, she’s opinionated, and she’s got no time for faint-hearted Disney darlings. Think Wicked, but wider and wetter. And definitely not for kids.

Chris Sudworth, Director of Artistic Programme at Birmingham Hippodrome said; “The moment I saw Fat Rascal’s hilarious production at this year’s Edinburgh Fringe I knew that we had to bring the show to Birmingham.

“The ideal adults-only outing for Christmas, this inventive and one-of-a-kind show is sure to be the must-see of the festive season and continues Birmingham Hippodrome’s commitment to showcasing fresh, new musicals.”

Unfortunate: the untold story of Ursula the Sea Witch plays at The Patrick Studio, Birmingham Hippodrome from Monday 16 – Sunday 22 December 2019.

Tickets are now on sale to Birmingham Hippodrome Friends and Patron scheme members, with tickets on general sale from 1pm, Wednesday 4 September. To book visit birminghamhippodrome.com or call 0844 338 5000 (4.5p per minute plus your phone company’s access charge).