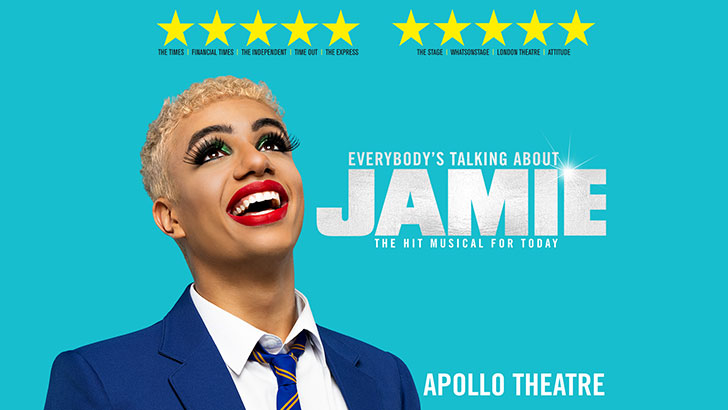 Everybody’s Talking About Jamie, the award-winning fabulous and feel good musical sensation, is delighted to announce that actor, comedian and presenter Rufus Hound and actor, writer and comedian Katy Brand will be joining the cast this March to play Hugo/Loco Chanelle and Miss Hedge at the Apollo Theatre in London’s West End.

Joining the cast of Everybody’s Talking About Jamie is a truly thrilling opportunity for me.  If I could tell my teenage self that I would one day have the chance to perform in a huge hit show on the West End stage, that girl would pinch herself.  Jamie gets to realise his dream every night, and now so do I!

I’m absolutely thrilled to be going into the cast of Everybody’s Talking About Jamie – a brilliant, brave and British smash hit. I have been waxing for the last year in anticipation and am currently so tucked I may as well be a Ken doll. Bring. It. On.

We are delighted that Katy Brand will be joining the cast as Miss Hedge and Rufus Hound as Hugo / Loco Chanelle. They will both bring their own incredible talent to their roles and make them their own.

Rufus Hound is an award-winning actor, presenter and comedian. His extensive list of stage credits include Freddy in the original West End production of Dirty Rotten Scoundrels, Francis Henshall in One Man Two Guv’nors (Theatre Royal Haymarket), Toad in Wind In The Willows (London Palladium) and more recently Sancho Panzo in Don Quixote (Garrick Theatre).He has also appeared in Utopia (Soho Theatre); Neville’s Island, What The Butler Saw,  Present Laughter (Chichester Festival Theatre); The Wars Of The Roses (Rose Theatre); Dusty and The Provoked Island (RSC). Rufus originated the role of Dad in the recent RSC production of The Boy In The Dress.

On-screen Rufus has appeared as a series regular in the hit comedies Zapped (Dave) and Trollied (Sky).  His other TV credits include Doctor Who, Cucumber, A Touch Of Cloth and as the eponymous hero in the BBC’s Hounded. His film credits include Beautiful Devils, Scottish Mussel, Keith Lemon: The Movie, My Big Fat Gypsy Gangster and the lead role of Raif in The Wedding Video. He can next be seen as Mr. Cato in Kat And The Band.

Rufus lends his vocal talents as the voice of Borka in Ronja The Robbers Daughter, as Gilbert in Sadie Sparks and as the title character Waffle in the BBC series Waffle the Wonderdog.

As a comedian, Rufus has been a regular team member on Celebrity Juice (ITV) for 7 series, and has appeared on a multitude of British comedy shows including Countdown, Dave Gorman: Terms & Conditions, Never Mind The Buzzcocks, Would I Lie To You?, 8 Out Of 10 Cats and You Have Been Watching to name a very select few.

Rufus continues to host the multi award-winning radio show My Teenage Diaries which is now in its 9th series.

Katy Brand started writing and performing from a young age and joined the Oxford University Drama Society and Oxford Revue while studying at University. Her first professional comedy performances were at the Ealing Film Studios, Ealing Live!, and the Edinburgh Fringe, Celebrities are Gods. She went on to devise, and star in, her award-winning ITV sketch show Katy Brand’s Big Ass Show which ran for three series and later became a nationwide tour.  She won a British Comedy Award for the show in 2008 and was also nominated for an RTS Award. During this time, she also co-wrote and performed in Mouthtrap with Katherine Parkinson which ran for two series on BBC Radio 4.

Her writing work includes developing scripts for Scott Free, Vertigo Films and Fudge Park for the film The Festival. She has also written for and appeared in numerous radio and TV shows, from BBC Radio 4’s News Quiz to Channel 4’s Peep Show.

In 2016, Katy took her first stand-up comedy show I Was A Teenage Christian to the Edinburgh Fringe and later toured with it nationwide. She returned to the Fringe in 2017 with the follow-up show, I Could’ve Been An Astronaut. Her debut play 3Womenstarring Anita Dobson opened at Trafalgar Studios 2 in May 2018 and is published by Samuel French. Her debut novel Brenda Monk Is Funnywas published by Unbound in 2014 and her new book I Carried A Watermelon, part memoir-part homage to Dirty Dancing was published by HQ Harper Collins in October 2019. Katy presents The Origin of Stuff on BBC Radio 4, a show which looks at the history, science and design behind everyday objects, and hosts the Penguin Podcast where she interviews leading authors about their latest book.

Jamie New is sixteen and lives on a council estate in Sheffield.

Jamie doesn’t quite fit in.

Jamie is terrified about the future.

Jamie is going to be a sensation.

Supported by his brilliant loving mum and surrounded by his friends, Jamie overcomes prejudice, beats the bullies and steps out of the darkness, into the spotlight. With catchy songs by lead singer-songwriter of The Feeling, Dan Gillespie Sells, and book and lyrics by writer Tom MacRae, this funny, fabulous, feel-good, musical sensation has been wowing audiences and critics alike. Sixteen: the edge of possibility. Time to make your dreams come true.