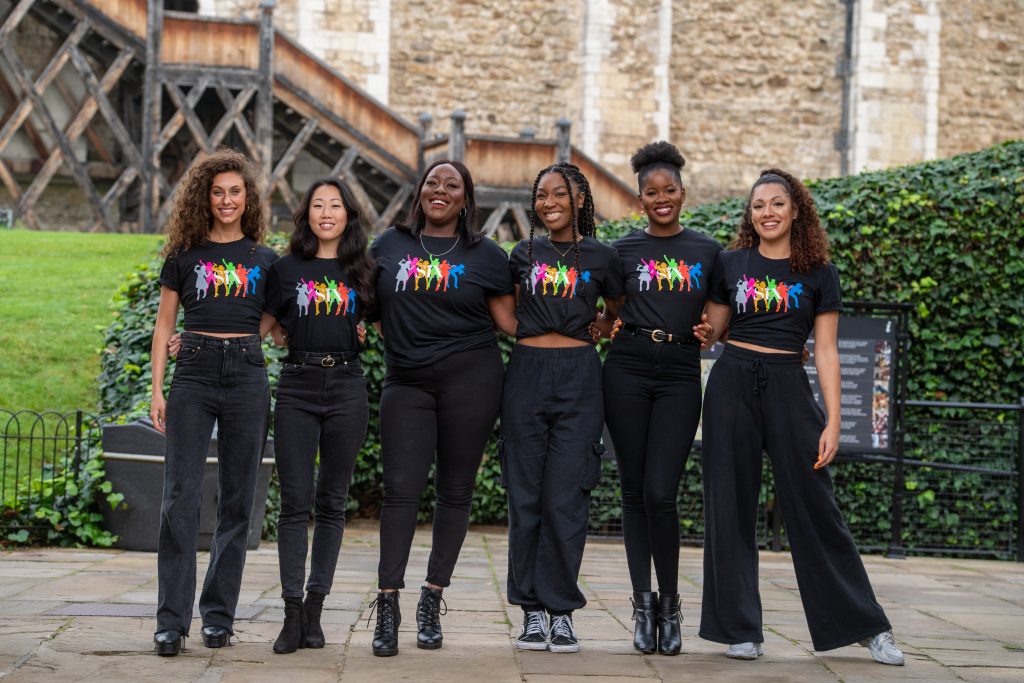 It’s all change at the palace as for the first time in ‘SIX’ her-story there is going to be a completely new cast of West End Queens, alternates and swings.

They are joined by Paisley Billings, Danielle Rose, and Roxanne Couch as Alternates, Rachel Rawlinson as Swing and Esme Rothero as Swing and Dance Captain.

Yesterday, the Queens met together for the first time for a photoshoot at the Tower of London, courtesy of Historic Royal Palaces, and today they started rehearsals.

Their first performance will be Tuesday November 16.

So who are the new Queens?

Amy Di Bartolome (Catherine of Aragon) made her professional debut in ‘Starlight Express’ in Germany, toured the UK in ‘Priscilla, Queen of the Desert’ and made her West End debut as ‘Leibeswoosh’ in ‘Bat Out of Hell’.

Amanda Lindgren (Anne Bolyen) hails from Sweden, was recently in ‘South Pacific’ at Chichester Festival Theatre, and has toured the UK and internationally in both ‘Miss Saigon’ and ‘The King and I’.

Claudia Kariuki (Jane Seymour) made her professional debut as Sarah in ‘Ragtime’ at Regent’s Park Open Air Theatre. Her West End credits include ‘School of Rock’ and ‘Wicked’. She played one of the Divas in the recent ‘Priscilla, Queen of the Desert’ UK Tour.

Dionne Ward-Anderson (Anna of Cleves) was in ‘Footloose’ (UK Tour) and is making her West End debut.

Tsemaye Bob-Egbe (Katherine Howard) was the alternate Tina in the original West End cast of  ‘Tina: The Tina Turner Story’, and Janelle Woods in ‘Beautiful: The Carole King Musical’, and
Leading Player in ‘Pippin’ (Garden Theatre).

Meesha Turner (Catherine Parr) is a recent graduate of the Royal Academy of Music making her professional and West End debut.

Paisley Billings (alternate Catherine of Aragon & Anna of Cleves) made her West End debut aged 11 as Young Nala in ‘The Lion King’. She was Karissa in ’On the Edge’ on C4.

Roxanne Couch (alternate Jane Seymour & Katherine Parr) appeared in the West End concert ‘I Could Use a Drink’ and ‘In Pieces’ at the Turbine Theatre.

Rachel Rawlinson (swing) was most recently in ‘Heathers’ in the West End and played a Diva in ’Priscilla, Queen of the Desert’. Her West End credits also include ‘Billy Elliot’, ‘The Sound of Music’, ‘Mary Poppins’ and ‘Chitty Chitty Bang Bang’.

The current West End Queens continue to reign at the Vaudeville and will play their final two shows on Sunday 14 November.

Electrifying musical ‘SIX’ by Toby Marlow and Lucy Moss has truly become a global phenomenon since its early days as a student production in a 100-seat room at Sweet Venue during the 2017 Edinburgh Fringe Festival. It is now being enjoyed as much as ever in its new West End home, the Vaudeville Theatre. It continues its sold-out UK Tour and has finally opened in New York to stunning reviews at the Brooks Atkinson Theatre on Broadway, and is due to reopen in Australia this December at the Sydney Opera House.

Last week it was announced that to celebrate the global success of its songs with 450 million streams and over 3 billion views on TikTok, ‘SIX’ is to release its Studio Album on vinyl. A VIP launch event will be held on October 28, 2021 at Banqueting House, on the site of the Palace of Whitehall built by Henry VIII, and will be livestreamed to the global Queendom by TikTok.

‘SIX’ was nominated for five Olivier Awards including Best New Musical. It won the BBC Radio 2
Audience Award for Best Musical at the Whatsonstage Awards, performed on the results show of ‘Britain’s Got Talent’ and has performed annually in front of thousands at West End Live in Trafalgar Square.