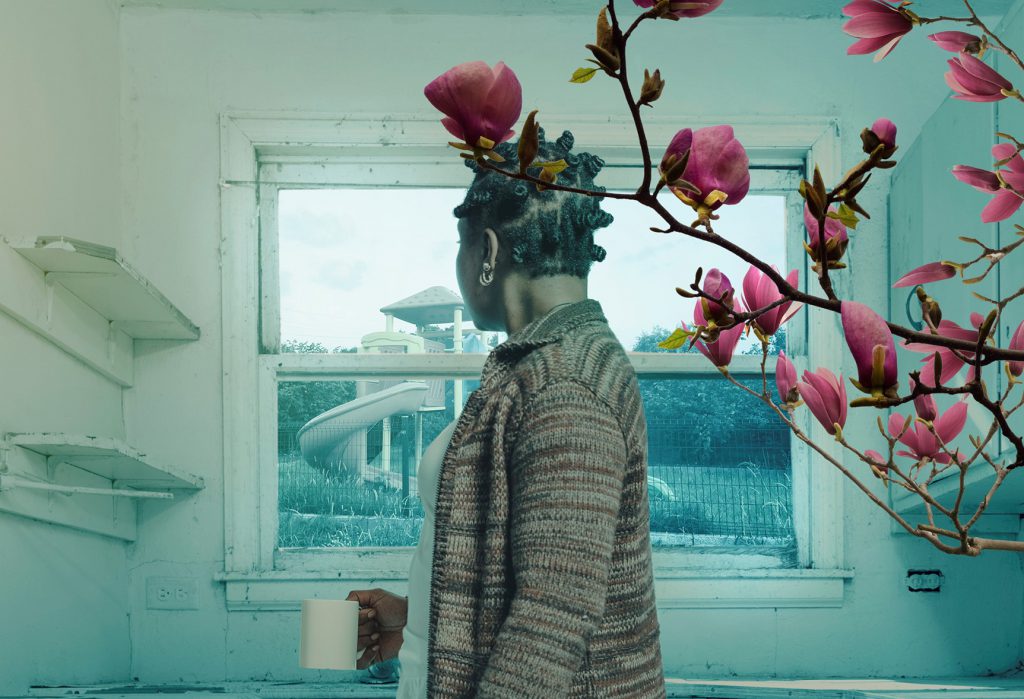 She drinks in the mornings.

She ate a rabbit.

She smashed up a shop.

She stabbed a man.

She used a hammer.

She had a baby.

She can’t find her mother.

She’s covered in blood and doesn’t know why

Alice Birch’s heartbreaking new play reaches across society to explore the impact of the criminal justice system on women and their families.

From 100 unnamed scenes, this theatrical provocation challenges the creative team to construct an entirely unique production.Directed by Maria Aberg, [BLANK] celebrates the 40th anniversary of Clean Break, the leading theatre company working with women affected by the criminal justice system.

[BLANK] is the third production in Artistic Director Michael Longhurst’s first season at the Donmar Warehouse. It is the highlight of Clean Break’s 40th Anniversary, celebrating four decades of making inspiring theatre with women’s voices at its heart. The year launched with Inside Bitch at the Royal Court and has included Rebel Voices – an anthology of 40 monologues from the company’s canon, published by Methuen Drama; Belong performed by Clean Break’s Young Members at the Arcola and Lyric Hammersmith; Chloë Moss’s play Sweatbox, touring the UK in a prison van; a first collaboration with Cardboard Citizens; and talks and events throughout the year.

Continuing its commitment to engaging new audiences, the Donmar is simplifying ticket access schemes with DONMAR DAILY RELEASE. This new scheme sees a minimum of 40 additional tickets released for sale every morning for performances seven days later. Audiences can sign up to receive information about productions and ticketing on the Donmar’s website, www.donmarwarehouse.com.

The Donmar’s successful free ticket scheme for those aged 16 -25, YOUNG+FREE, will continue with [BLANK], offering seats for performances across the season with tickets released by ballot at the end of every month. YOUNG+FREE is funded through the generosity of audiences via the Donmar’s PAY IT FORWARD scheme. These donations have enabled the Donmar to allocate more than 18,000 free tickets to those aged under 26. Clean Break and the Donmar will also enable a number of women who have been affected by the criminal justice system to see the production for free.

Before [BLANK] takes to the Donmar stage, the UK premiere of Appropriate by Branden Jacobs-Jenkins, directed by Ola Ince, starring Monica Dolan and Steven Mackintosh, runs until 5 October 2019. Further productions include Teenage Dick by Mike Lew, directed by Michael Longhurst and Far Away by Caryl Churchill, directed by Lyndsey Turner – both of which will go on sale soon.

Alice Birch (Writer) is the winner of the Arts Foundation Award for Playwriting 2014, the co-winner of the George Devine Award for Most Promising Playwright 2014 and was shortlisted for the Susan Smith Blackburn Award in 2012 and 2015. Theatre includes: La Maladie de la Mort (Bouffes du Nord); Anatomy of a Suicide (Royal Court), Schatten (Schaubühne, Berlin); Revolt. She Said. Revolt Again. (RSC/Soho Rep), Ophelias Zimmer (Royal Court/ Schaubühne, Berlin), We Want You to Watch (National Theatre), Little Light(Orange Tree), Little on the inside (Almeida/ Clean Break) and Many Moons (Theatre 503). Film includes Lady Macbeth for the BBC, BFI and Creative England which was the winner of the International Critics’ Prize at San Sebastian Film Festival 2016, the Best First Feature at Zurich Film Festival 2016, Best Screenplay at Turin Film Festival 2016 and Best Screenplay at the British Independent Film Awards 2017.

Shona Babayemi makes her Donmar Warehouse debut in [BLANK]. Shona trained at the Identity School of Acting (IDSA) after studying Theatre and Drama Studies at the University of London. Whilst working with Cardboard Citizens, Shona had the opportunity of working internationally in Berlin – performing in Invisible People (Ufa Fabrik International Culture Centre). She went on to tour with the company in their production of Rising, playing Danielle. Joining the School for Wise Children, Shona worked alongside theatre director Emma Rice, devising and exploring varying theatrical techniques. She is an avid writer and spoken word artist and continues to pursue this as a Soho Theatre Writers Member. She will join the Royal Court Theatre’s Playwriting group in January 2020. Shona remains an ardent and active member of the Clean Break Theatre Company, participating in workshops and programmes as well as recently performing in their promenade production All The Lights Are On as part of the company’s 40th anniversary celebrations.

Sophia Brown makes her Donmar Warehouse debut in [BLANK]. Her TV credits include The Capture, Girl/Haji, Marcella, Clique, Guerrilla, Casualty and Top Boy. Her film credits include A Battle in Waterloo, Disobedience, Beauty and the Beast and Genius.

Grace Doherty makes her Donmar Warehouse debut in [BLANK]. Her theatre credits include The Wild Duck (Almeida), The Ferryman(Gielgud/Royal Court), Love (Birmingham Rep/National Theatre), X (Royal Court) and Made in Dagenham (Adelphi). Her radio credits include The Door in the Pillow, Home Front, Norse Mythology, The Summer Book by Tove Jansson and Pearl.

Lucy Edkins makes her Donmar Warehouse debut in [BLANK]. Her previous acting credits include Inside Bitch (Royal Court). Lucy has been involved with Clean Break since the mid-90s, following her work with Nomads…, a theatre and film company she co-founded that worked with vulnerable groups (including prisoners) and performed plays in unconventional venues. Lucy has taken part in workshops with Clean Break including a Complicité workshop culminating in a devised piece, The Ex-Industry, performed in local prisons and a rehab unit. She went on to work professionally with Clean Break in their stage management teams, on productions including Mulesand Yard Gal at the Royal Court, touring nationally with the latter around prisons and art centres. Her work in theatre also includes stage managing and an assistant director on Life After Life (National Theatre). Since 2003 she has concentrated on artistic work across media, including a couple of years playwriting and showcasing new works. Her television and short film credits include Casualty andEleanor.

Zainab Hasan returns to the Donmar Warehouse after appearing in the Shakespeare Trilogy and Henry IV. Zainab also appeared in the Donmar’s productions of The Tempest and Henry IV at St. Ann’s Warehouse, NY. Other theatre credits include My White Best Friend(Bunker), Tamburlaine, Tartuffe and Timon of Athens (RSC), Hijabi Monologues (Bush), Boy (Almeida), Tory Boyz, Romeo and Juliet andPrince of Denmark (Ambassadors), Red Riding Hood (Latitude Festival), On The Dole (Lyric Hammersmith), D and The Boyfriend (Oval House), Routes (Hampstead) and Totally Over You (Tricycle).

Thusitha Jayasundera makes her Donmar Warehouse debut in [BLANK]. Her theatre credits include Our Town (Regent’s Park Open Air),Stories, Behind The Beautiful Forevers, Crime and Punishment and War Horse (National Theatre), The Divide (Old Vic/King’s, Edinburgh), The Vertical Hour (Park), Tiger Country (Hampstead), A Day at the Racists (Finborough), Dreams of Violence (Out of Joint/Soho/UK Tour), Twelfth Night, As I Lay Dying (Young Vic), and Cain, Peer Gynt, Pentecost, The Comedy of Errors (RSC). Her TV credits include Humans, Midsomer Murders, Doctor Foster, Broadchurch, The C Word and Above Suspicion.

Kate O’Flynn makes her Donmar Warehouse debut in [BLANK]. Her theatre credits include The End of History, Anatomy of a Suicide, The Ritual Slaughter of Gorge Mastromas and A Miracle (Royal Court), One for the Road/Mountain Language/Ashes to Ashes (Harold Pinter), The Glass Menagerie (Duke of York’s/Edinburgh International Festival), The Trial (Young Vic), A Taste of Honey and Port(National Theatre), Lungs and The Sound of Heavy Rain (Paines Plough/Crucible, Sheffield), Marine Parade (ETT), The Whisky Taster(Bush), The House of Special Purpose (Chichester), See How They Run and The Children’s Hour (Royal Exchange, Manchester). Her TV credits include Brexit, No Offence, Wanderlust, Doctor Thorne, Not You Again, Ordinary Lies, New Tricks, Room at the Top, Playhouse Presents: The Snipist, Above Suspicion, The Syndicate, The Suspicions of Mr Whicher, Kingdom, The Palace and Trial & Retribution. Her film credits include Peterloo, Bridget Jones’ Baby, Mr. Turner, Up There and Happy Go Lucky. Her awards include the Clarence Derwent Award and Olivier Award nomination for Best Actress in a Supporting Role for The Glass Menagerie, a Manchester Evening Standard Award for Best Newcomer for The Children’s Hour, a TMA Award for Best Supporting Actress for The Children’s Hour and the Critics’ Circle Award for Most Promising Newcomer for Port.

Ashna Rabheru makes her Donmar Warehouse debut in [BLANK]. Ashna graduated from the Royal Welsh College of Music and Drama where her work included Between Riverside and Crazy, Candide, The Crucible and Much Ado about Nothing. Her theatre credits include Trojan Horse (LUNG/Leeds Playhouse) and Top Girls (National Theatre). Her TV credits include Pickle Jar, Sex Education, Year of the Rabbit, Bounty, Is This Thing On? and Indian Summers. Her radio credits include, Deacon: Moonlight on Water, Splott, Dangerous Visions: Perimeter and Where This Service Will Continue.

Taya Tower makes her Donmar Warehouse debut in [BLANK]. Her theatre credits include The Hunt (Almeida).Taya is currently nominated for the Stage Debut Award for Young Performer.