INTERVIEW: Ricardo Afonso explains why finally getting to play his dream role of Judas has been such a rewarding & emotional experience 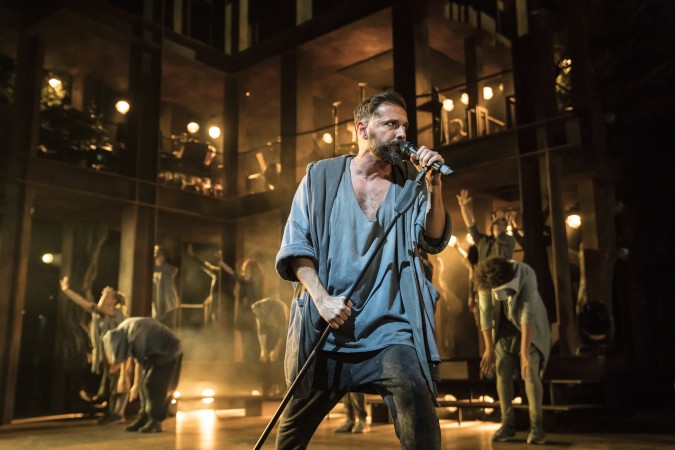 Ricardo Afonso is both a West End leading man and a celebrated musician. He has a number of theatre credits to his name including a high profile and successful run as Galileo in We Will Rock You. In 2016 he was cast as Judas in the anticipated revival of Andrew Lloyd Webber and Tim Rice’s epic rock opera Jesus Christ Superstar. In a cruel twist of fate, Ricardo was forced to withdraw from the production due to health reasons. Thanks to two sell-out seasons at Regent’s Park Open Air Theatre, the show has transferred to the Barbican Centre for a limited season with Ricardo finally able to put his stamp on a role he’s coveted for his whole career. It’s safe to say it was worth the wait; Ricardo’s vocal performance is out of this world and has generated some serious buzz around the production. We caught up with Ricardo and Robert Tripolini (who plays Jesus) for a chat before the show as they tell us what a profound impact the show has had on them and why they are bursting with absolute pride at the continued success of this adrenaline-pumping revival.

Describe this production of Jesus Christ Superstar in one sentence – It’s a dramatically staged representation of the 1970 vinyl with bags of passion and glitter!

How did you come to get involved with the show and what was the audition process like? My process started in 2016 when I went through the first set of auditions; I was doing The Classic Rock Show tour at the time. I was honoured and thrilled to be given the part of Judas but unfortunately, I had some health issues which forced me to withdraw from the show, which was absolutely horrible. I’ve always wanted to play Judas and JCS is a musical I’ve always wanted to be a part of, so it was incredibly tough to let it go. However, that is the roller-coaster of life and one moment you are up and one the next you are down. I overcame my illness and the second opportunity with JCS came back in January when I called the producers and expressed my interest in auditioning for the Barbican run. I then went through the same stages of auditions with them, which was quite a different experience to the previous time. Back then they didn’t have a clear cut view of what they wanted to do with the piece and this time around that vision was very clear. Thankfully after five or six rounds, they offered me the role again, so I was essentially back where I started three years ago. I just felt immense joy and I still struggle to put into words exactly how it feels. The best way for me to explain it is like this; when I get to the end of the week I am so tired, mentally, physically and vocally, but yet so fulfilled and nothing beats that. After such a challenging time I am now in the happiest place I can possibly be, knowing that despite the challenges I have faced I am still getting to do what I love in a role I have always wanted to play.

JCS has been recreated for stage numerous times, what differentiates this version from all the others? I honestly think it maintains the rawness of the album, not that other productions didn’t, but this one enhances it more which was the specific goal of this production. The producers and creative’s have really come together to enhance the sound and the music. It’s also really about respecting all the spaces to achieve that, so I think that’s the main difference. Also, unusually the band came into rehearsals halfway through so we met them and started singing with them before sitzprobe which is something that I have never experienced on a show before. That is another significant difference when you compare it to previous productions.

You and Robert have taken incredibly different paths in the lead up to JCS, how have your experiences informed your performance? We all use things from our lives to help us enhance a few scenes. What happened to me in 2016 was not a happy time at all, so I try to channel that and the negative energy that surrounded that moment, along with the positive energy that I felt when I was offered the role for the second time. Even the emotions and experiences you face in the worst situations can be used to help you overcome other tough moments in your life. So I definitely channel some of that energy into some of those performances, not completely throughout but in pertinent moments where I need to, so I know I have that anchor there if I need to use it.

Is there a common quality that you feel you’ve given to or taken from your role? For me it’s control. Judas begins the show in such angst, so it’s really important to control that energy. The control of that powerful emotion is so important because it can’t all be revealed during the first song or the first scene. You have to ease yourself in and you have to measure constantly. Playing Judas has taught to measure that emotion to maintain the correct levels of energy required at any given moment during the show. It has to be an ascending curve so I definitely think I use him and he uses me.

How do you prepare for and take care of your voice when delivering such a demanding rock-opera score night after night? I’m actually drinking a ginger tea right now. Ginger helps with my digestion which was part of the problem back in 2016 – so ginger is now my mate for life! In terms of my vocal warm-up, I have got to the point where I don’t necessarily batter my voice too much in my warm-ups. I try to make sure that my larynx is working properly, so I am careful with retraction and the tilt of the cricoid. It’s more to do with the physical process of singing and the impact that has on the voice box so my vocal warm-ups involve sirens and that’s it really. I try to relax everything that powers my voice as much as I can, and I drink lots of water. I must drink, and this is no exaggeration, five litres a day, possibly more on two-show days. So I am constantly running for the toilet – I have to pick my moments during the show where I can have a quick break! So that’s my routine, it involves rest, sleep, lots of water and looking after the physical part of my voice box.

Do you have a favourite moment in the show and if so, why? I think to say I have a favourite moment suggests that I don’t like the other ones as much which is not strictly accurate. To get to a favourite moment you have to go through the other scenes to reach it, so it’s a journey. That said, there are a couple of special moments, hearing Robert sing Gethsemane when I’m backstage every night is tremendous, it really is. I like our fight scene at the Last Supper. As Robert said, the whole show is a favourite moment, it’s like when I’m playing the album, I don’t pick the track ahead. You put the needle on the vinyl (because I am that old) and just listen to the whole thing. It’s just a great piece and so fulfilling.

What has been your biggest career highlight to date? I would say that because it is Judas and it is what I’ve always wanted to do – it has to be this one. I am so proud of everyone involved in this production and what we’ve all achieved and I think I can let myself be proud as well. I am proud of what I am doing here and I really don’t want it to end. Slightly emotional answer, but it really is an incredibly special show for me, it’s such a great role and I still can’t believe I am doing it.

What do you consider your profession’s greatest challenge today? For me, it’s juggling my work-life balance. I have a family, I have two boys and my family absolutely comes first. At no point will I take a job that will mean I miss key moments of my sons growing up, I feel like I need to be there constantly for them. I will never take a job that will stop me from performing my most important role which is a dad and husband. So balancing my professional and personal life is a huge challenge. Of course, toddler tantrums are very hard and when they were babies I didn’t sleep or rest my voice as much as I probably should. The knock-on from that is you go into work a little more tired making it much easier to pick up colds and bugs. You’ve also got things like helping with homework, troubles at school I am and always will be there for them during their formative years. I think for any performer who has a family and young children, creating harmony in your professional and personal life will always be a challenge.

What was the last thing you saw at the theatre and what do you wish you had seen but missed? The last thing I saw was Come From Away and I thought it was one of the best pieces of theatre I have ever seen. They started and my first reaction was there is no way they are going to keep up this tempo, it’s impossible – but they do! I found myself wanting to clap halfway through a song! It wraps you in such emotion, it’s just astonishing. A show that I didn’t miss but I wish I could see over and over again is The Drowsy Chaperone, I love farce, I love comedy and old fashioned musicals and that show was incredible.

We then asked Ricardo some Dress Circle Antics quickfire questions…

Who would play you in the story of your life – Bradley Cooper!

Dream Role – I am currently playing him – Judas

Favourite musical number – There’s so many! If I had to pick it would be I Am Aldolpho from The Drowsy Chaperone

Go to audition song – I have two I usually use, The Show Must Go On, Queen and I use I Am Aldolpho for comedy roles (I love that song so much). Oh, I also use Go The Distance from Hercules…

Dream Superpower – Flying for sure!

Favourite musical – Apart from JCS, which I love a lot, I would say Come From Away there is just something so special about that show, maybe because it’s true a true story…

If you could play the lead in any other musical (regardless of gender) who would it be? – I can’t sing it but I would love to play either Jean Valjean or Javert from Les Mis

Tell us something no one knows about you – I love science! I wanted to be a marine biologist, part of me still wants to be one.

Jesus Christ Superstar is playing at the Barbican Centre until 24 August 2019.