REVIEW: Grease The Musical – The multi-talented cast are the feather in the cap of this production 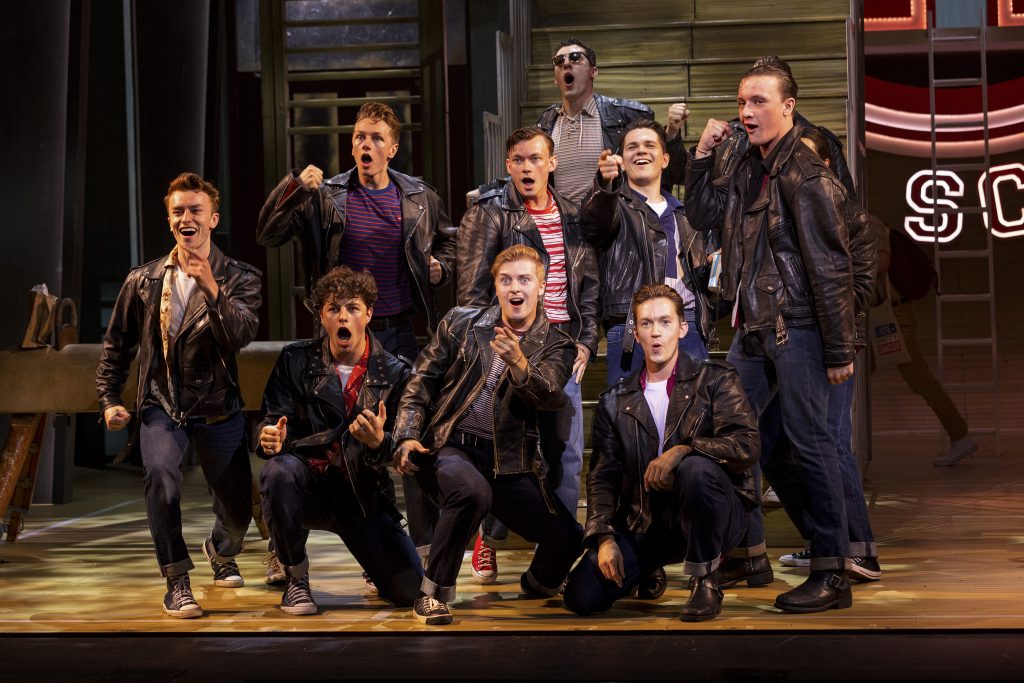 Grease, the ultimate feel-good classic roars into Milton Keynes Theatre promising fantastic fun in the form of a new adaptation of the old favourite. If you are heading to the theatre expecting to see another version of the beloved 1978 musical, think again. This incarnation of Grease is unapologetically gritty having revisited it’s original Broadway roots.

The multi-talented cast are the feather in the cap of this production. Departing from the much loved and familiar format of such an iconic production is a risk, but thanks to the stellar cast it just about pays off. Arlene Phillips’ choreography coupled with the outstanding performances ignite the spark. The numbers are fast-paced, energetic and technically outstanding.

Dan Partridge and Georgia Louise take up the lead roles of Danny Zuko and Sandy Dumbrowki. The pair are positively electrifying throughout. They are wonderfully dynamic performers, making the iconic roles their own.

The wider ensemble cast is an absolute triumph. David Grindrod Associates and Kay Magson CDG have assembled a truly astonishing group for this UK tour. Arguably at times the ensemble’s energy was more on point than the principals which is testament to their hard work and talent. Thea Bunting in particular deserves accolades aplenty for her portrayal of Patty Simcox. Bunting is absolutely bursting with a bright infectious optimism and endless energy which never wanes.

It would be a safe bet that the numbers most synonymous with Grease should be the standouts, however this couldn’t be further from the truth. In Act One, Summer Nights, Greased Lightning and We Go Together are timid affairs. Even the funky LED lights of Kenikie’s Dodge Wayfarer aren’t enough to elevate these iconic numbers to their former heady heights.

Speaking of Kenickie, he is played stupendously by Paul French. He plays the role with an aura and air of authority. His on-again-off-again relationship with Rizzo remains true to the 1978 version, providing just a slither of familiarity.

The traditionally unfamiliar numbers Freddy My Love and Mooning allow the cast to showcase their incredible vocal talents. Inez Budd as Marty is a class act. He is complemented by Maeve Byrne and Josh Barnett as Jan and Roger. They cultivate a sweet and joyous chemistry that juxtaposes the otherwise greasy and grimy hookups. Despite them not being the main couple, they steal the show with their likeable personalities and carefree attitudes.

Grease has befallen the trope of casting a celebrity as the big name draw for the production. Enter Peter Andre who reprises his role as Teen Angel. This time around, Andre takes on a dual role which includes predatory DJ Vince Fontaine. As is the risk with the celebrity casting, they can often be the weak link in a production of multi-talented musical theatre professionals. Sadly, for Andre, this is the case here.

Though his profile certainly draws the crowds and it’s clear that he is having a ball, Andre just feels that little bit subpar in comparison to his co-stars. Unfortunately for him, this version of Grease portrays Vince Fontaine as an overly handsy predator. The Hand Jive scene is uncomfortable to watch and overshadows his performance which is a real shame. Andre does manage to showcase his vocal prowess during Beauty School Dropout which allows for some redemption.

It’s safe to say that this version of Grease won’t be for everyone. The billing isn’t wrong – it’s gritty and unapologetic in it’s delivery. The beloved characters are almost unlikeable removing the saccharine familiarity, replacing it with real world grit and angst. It’s not necessarily a bad thing though, long running shows need to evolve to endure and this version certainly holds it’s own.