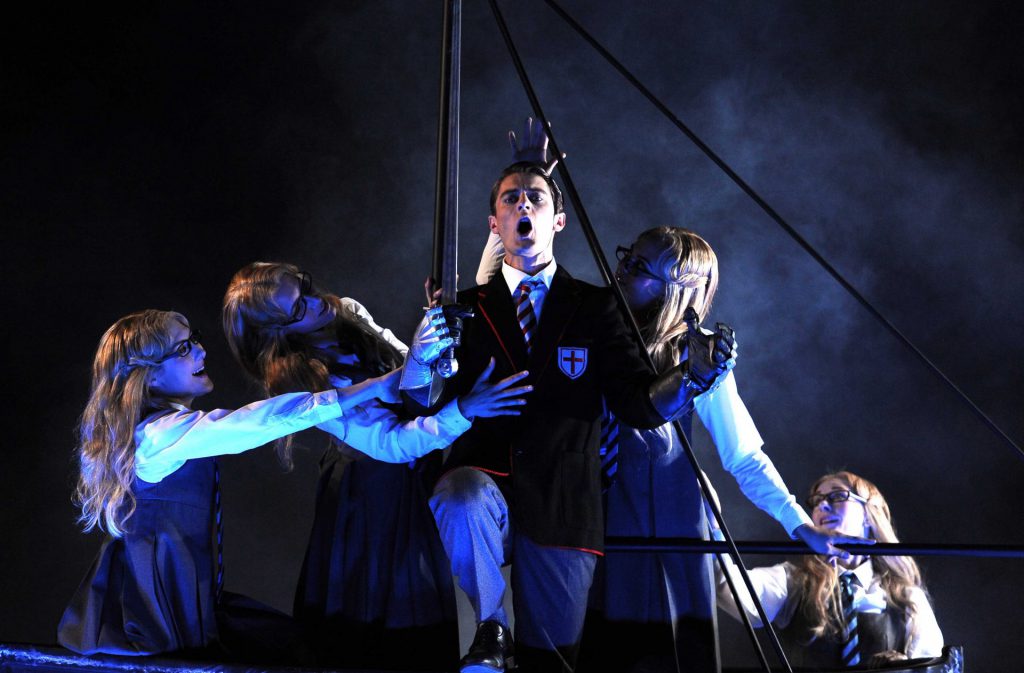 Written in 1711, Handel’s Rinaldo is set during the First Crusade of 1099. It was the first Italian opera written for a London audience, which he composed to impress the audience with great visual effects and drama. The Glyndebourne Tour 2019 has successfully staged a refreshing interpretation of this little-known gem, although arguably falls shorts of the opera’s original intention.

Rinaldo’s plot is complex and multifaceted, taking place in Outremer where Christian forces led by Goffredo (Godfrey of Bouillon) are besieging the city of Jerusalem, which is defended by its king, Argante. With Goffredo are his brother Eustazio and his daughter Almirena, who loves and is loved by the Christian knight Rinaldo. Argante’s ally and lover is Armida, Queen of Damascus and a formidable sorceress who attempts to lure Rinaldo to the dark side using her feminine wiles.

With the names Almirena and Armida designed to confuse from the off, alongside the complex to-ing and fro-ing of the characters’ flitting romantic interests and questionable decisions, one needs full concentration for this epic to be kept up with. As a composer, Handel’s ability to mix comedy and tragedy is skilfully balanced, which is an element that director Robert Carsen clearly wants to do justice to and successfully manages this, to an extent.

Led by an incredibly strong cast that blissfully showers us in melismatic dreaminess, this production wows with its vocal talents. James Hall as Goffredogives a stand-out performance and his even and clear timbre, all through his impressive vocal range, is something to enjoy, admire and behold.

A man who is much-revered in the Baroque music world, Jake Arditti as Rinaldo is also well-cast, gracing us with a powerful and rich countertenor voice, beautifully mixed with some touching, heart-felt acting. Anna Devin as Almirena also leaves quite the impact with her emotive, stunning and, quite frankly, flawless performance of the well-known and highly acclaimed aria, ‘Laschia Ch’io Pianga’.

With the opera set in a modern-day school classroom, with lovers behind the bike sheds, a crazy chemist in a school laboratory, a middle-eastern palace, boats full of sirens (the list goes on), this production can, at times, feel a little confused and random. Watching grown men ride round on scooters and bikes, donning knight helmets and armour worn over their school uniforms whilst singing 18th century opera is quite the experience to behold.

With the ‘students’ (Armida’s minions) writhing around in fishnets and short skirts, with ‘teacher’, Armida, dressed head to toe in rubber gear, whipping them and making phallic gestures with swords, it is uncomfortable at times and is also perhaps a strange choice of context. Having such clear sadomasochistic elements in this setting can make for uncomfortable viewing.

Act I is a little slow to get going and it takes a while to get your historical context, plot and character bearings. The standout moment of the act comes from Jake Ardetti, singing Rinaldo’s beautifully touching and pained aria ‘Cara Sposa, Amante Cara’, after his beloved Almirena is taken from him. By Act II, the plot picks up and the humour starts to take us on a more enjoyable journey, with countertenor James Hall stealing the limelight throughout with his impeccable acting skills and vocal agility.

It would be remiss not to mention the excellence of conductor, David Bates, and the Glyndebourne Tour Orchestra. The instruments of a Baroque orchestra vary from that of the standard Classical orchestra and it is wonderful to hear and see an archlute and sopranino recorder, for example, which is not a common occurrence. Brought together by critically acclaimed conductor, David Bates, it meant for a fantastic instrumental performance.

Not originally written as a comedic opera, it is difficult to place this production. Are we viewing a comedy or are we viewing Rinaldo? A potentially five-star production could simultaneously be a three-star opera.

If Handel and John Cleese were to have a baby… This production screams Monty Python and gifts many belly laughs. The moments of tragedy mixed with farce, comedic timing and childish behaviour make for an enjoyable watch, that is if you are wanting good comedy value from this performance of the opera, as opposed to a serious, ‘traditional’ production. Half expecting Ben Elton to appear at any moment, it is easy to forget that you are watching a classic, Baroque masterpiece. It can be too easy to forget to listen to what is, arguably, the most important part of Handel’s opera; the music.

The humour and action distract from the art form, forcing the perfect balance of comedy and the ability to take the art form seriously, slightly off. A strong cast and phenomenal orchestra make up for this to a degree and if you want an enjoyable night out with laughs-a-plentiful, you can certainly get this here. If you are after a serious production in its original context, with the music as the priority, then this may not be to your taste.