REVIEW: The Time Of Our Lies 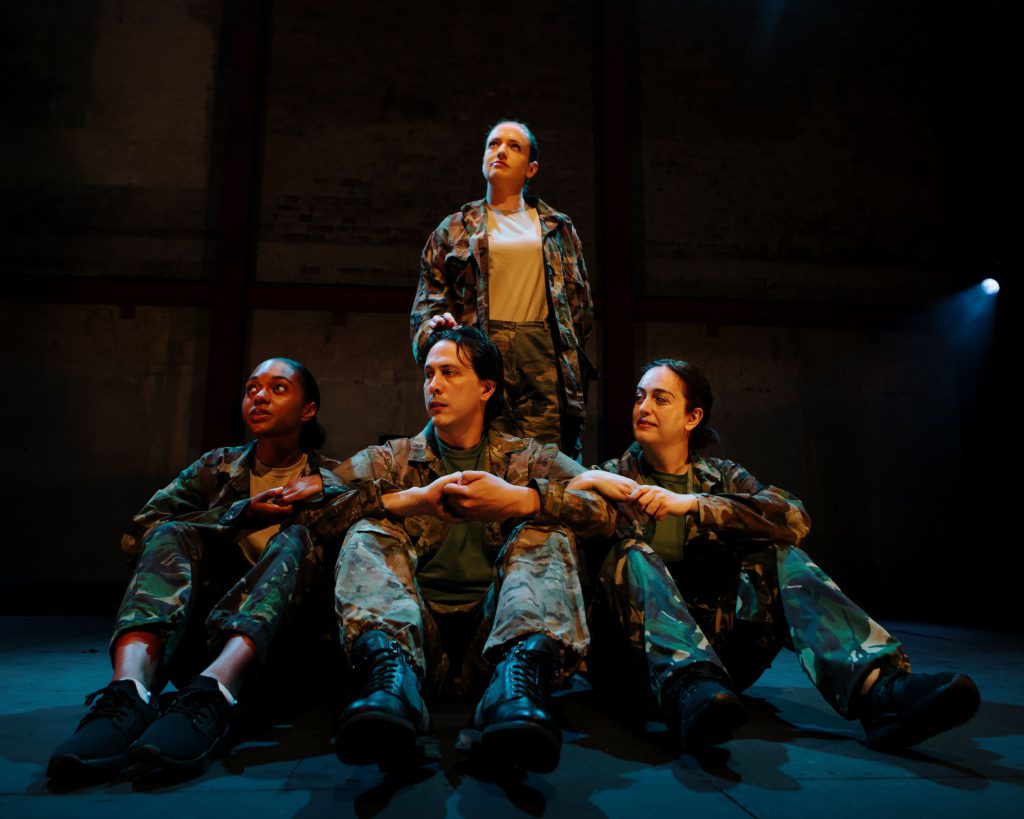 It’s probably fair to say that in a tumultuous world of political uncertainty and increasing violence we have become somewhat desensitised to the news. Inspired by the works of solider turned activist Howard Zinn, The Time Of Our Lies explores what it means to become sensitised and acutely aware of the ethical dilemmas of war and the huge cost of large scale civil obedience. After a successful run at Edinburgh Fringe and an Amnesty International Freedom of Expression Award nomination in 2014, Bianca Bagatourian’s The Time Of Our Lies arrives at the Park Theatre for a London run.

At 24 years old Zinn was a Bombardier serving in World War II, driven by a desire to fight fascism he went on to bomb various areas of Berlin, Hungary and Czechoslovakia. However it was his active participation in the bombing of Royan, a coastal French town that caused Zinn to begin to question the justification of war. Unwittingly following orders Zinn and his colleagues dropped napalm on the town which led to the deaths of 30 civilians and almost a thousand military personnel. So affected by his experience Zinn returned to New York, deposited his medals in an envelope, on which he wrote“Never Again.” Those early experiences shaped Zinn into the man who would become a moral compass for the United States in ways that are more unfortunately more relevant today than ever before.

It’s always an ominous sign when the Director (Ché Walker in this case), strides onto the stage announcing that the lead actor is unable to perform. Due to unforeseen circumstances Daniel Benzali was forced to withdraw from the performance, putting the production in jeopardy. Nobody wants to see an opening night cancelled, so Walker called on Martina Laird who stepped into the role with less than 24 hours to prepare. There was a wry ripple of laughter when Walker announced that Laird, a black woman would be playing the role of the 75 year old white Jewish Zinn, but it’s safe to say that Laird produces a spellbinding performance in hugely challenging circumstances. Despite reading much of the script from a folder, Laird manages to captivate and hold the audience’s attention as she addresses them directly; her performance is both nuanced and beautifully delivered. James Bond actor Colin Salmon will be performing for one night only on 2 August, with Benzali hopefully rejoining the company thereafter.

The Time of Our Lies is inspired by multiple sections of Zinn’s books of which there are over twenty spanning World War II, The Civil Rights Movement, Vietnam and the Iraq war. Walker has taken a sombre approach in his direction; the staging is sparse, save for a seat and a lectern where Zinn delivers his words in almost a lecture like format. The wider ensemble, move in and out of the piece as they bring his words to life. At any given time they are clad in the khaki uniform of the armed forces as, honour, freedom and following orders is challenged at every turn. Zinn constantly poses the question, who is it they are actually serving? Is it their country or is the government?

There are unexpected musical moments within the piece which are delivered by the accomplished ensemble to further illustrate the plight of immigrants and victims of war. The musical interludes also play homage to Walker’s observations around Zinn’s rhythmic and musical writing style. The music also help to pace the piece and stop it becoming too much of a lecture. Arnim Freiss’s lighting design is at times severe with red spot lights depicting gunshots and the unavoidable bloodshed that follows.

There is a Trump reference which seems somewhat out of place, Zinn passed away several years before Trump came to power, and whilst Alvaro Flores delivered an uncanny impression, its inclusion doesn’t naturally flow within the narrative. That said, in a time of political unrest both in the UK and in the United States with a cavalier president validating far-right ideals through his behaviour, Zinn’s ethical stance cannot be more relevant. In an age where the internet is king, it’s difficult to hide the large scale damage that conflict can cause, as was the case in the pre digital age. There is far more outcry with demand for accountability in the event of perceived collateral damage for a greater good, but as Zinn himself says “How can you have a war on terrorism when war itself is terrorism?”

The Time Of Our Lies is an incredibly powerful piece of theatre that invites a shift in a belief system so heavily ingrained, the realisation strikes like a bolt of lightning.