REVIEW: VIOLET – Beauty is not in the face; beauty is a light in the heart 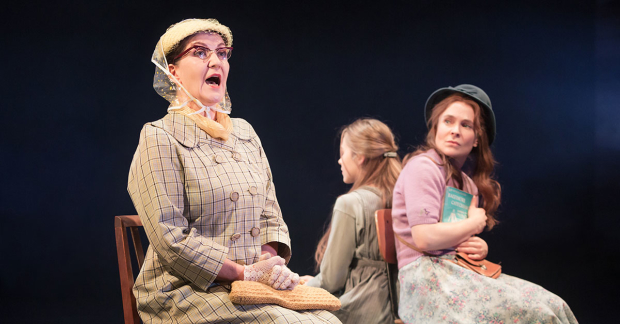 Since 1864, there has been a theatre under the arches at Charing Cross Station, and within the intimate auditorium, something special is currently taking place. The theatre’s standard configuration has been shifted making way for a circular, rotating stage that plays host to the UK premiere of Violet where the audience is significantly immersed in the action, framing the stage from both sides. 100 minutes long, with no interval, Violet is an intense rollercoaster of emotions from beginning to end.

Set in the 1964 Deep South, the musical, based on Doris Betts short story The Ugliest Pilgrim tells the story of Violet, a young woman horribly disfigured in an accident at the age of thirteen. Tortured and tormented by her appearance Violet embarks on a character defining and life-affirming journey from North Carolina to Tulsa, Oklahoma where she hopes a TV Evangelical preacher can heal her. The musical charts Violet’s journey on-board the Greyhound bus and the impact her fellow travellers have on her as she makes her trip across the country in her quest for a cure and ultimate acceptance.

Violet premiered Off-Broadway at Playwrights Horizons in 1997 having been in development since 1994. With book and lyrics by Brian Crawley (A Little Princess) and music by Tony Award winner Jeanine Tesori (Fun Home, Caroline, or Change). Directed by Susan H Schulman with choreography by Kathleen Marshall, the show won the Drama Critics’ Circle Award and Lucille Lortel Award for Best Musical.

Violet made it’s Broadway premiere at the American Airlines Theatre where it opened in April 2014 with two-time Tony winner Sutton Foster (Thoroughly Modern Millie, Anything Goes) in the titular role. The musical enjoyed reasonable success and eventually closed after 27 previews and 128 performances in August 2014, with four Tony nominations to its name.

Opening in London on 14 January, this production of Violet is part of a major co-production for Charing Cross Theatre and Umeda Arts Theater Company in Osaka, Japan that will see the show transferring to Tokyo after it’s 12 week London run wraps in April.

Rather excitingly this collaboration will be the first of many planned between the two production houses, with Charing Cross Theatre’s artistic director Thom Southerland being quoted saying “This collaboration marks the beginning of an exchange of both work and artists between Charing Cross Theatre and Umeda Arts and we will soon announce further projects including the development of new work and further UK premieres.”

The cast is lead by the hugely accomplished Kaisa Hammarlund, recently seen as Alison Bechdel in the UK production of Fun Home at the Young Vic. She is joined by Matthew Harvey (Les Misérables) as soldier Monty and Jay Marsh (Miss Saigon) as the endearing Flick. The wider cast is made up of Simbi Akande, Angelica Allen, Kenneth Avery-Clark, Keiron Crook, James Gant, Danny Michaels, Janet Mooney with Amy Mepham, Rebecca Nardin, and Maddie Sellman alternating in the role of young Violet.

Hammarlund is truly wonderful in the role of the tortured and resentful Violet. She embodies the character with just the right combination of vulnerability and bitterness, demonstrating Violet’s hardened reserve to her outwardly shocking appearance and abject resignation to others reactions. Hammarlund’s investment and commitment to this role should be congratulated. She holds nothing back and her energy levels never waver, she leaves absolutely everything on the stage as the musical concludes.

Despite a wildly talented cast, one problem that many productions face when adapting short stories for the stage is the lack of character development. Previous productions of Violet have been criticised for this and unfortunately, this version does suffer as a result. More could be made of the synergies between Violet and African American soldier Flick. His shared affinity with Violet around being judged on his appearance would benefit from further nurturing to aid the subsequent development of the characters relationship. The same could be said for Violet’s relationship with ladies man Monty – the character is just not quite rounded enough making his intentions and motivation not only questionable but lacking substance.

Nevertheless, the actors do incredibly well with the material they have to work with. Jay Marsh brings a warmth to the character of Flick, his solo performance of Let it Sing a particular highlight. Matthew Harvey plays his compatriot Monty with a boyish charm that is not lost on Violet herself.

Despite shortfalls with characterisation, Violet’s unwavering strength and feather in its cap is Jeanine Tesori’s rich score. This production is a strong ensemble piece with both the cast and 9-piece band doing incredible justice to the music.

Full of powerful numbers, the country-folk-gospel soundtrack is where Violet excels. A particular standout is Angelica Allen’s version of Lonely Stanger – a show-stopping, high tempo, music hall number. Allen’s vocals are incredible and her performance is a complete scene stealer. Kenneth Avery-Clark produces an outstanding turn as the dubious Preacher with whom Violet places all her faith. The roof is well and truly raised when Avery-Clark and the talented Simbi Akande perform the raucous gospel number Raise Me Up.

The intimacy of the venue also adds to the effectiveness of the staging and Violet’s movement is also incredibly clever. The revolving stage used simply but effectively with various flashback scenes cleverly entwined with present day action. Kerion Crook is believable as Violet’s guilt-ridden father and his moments with the young Violet are touching as her back story is revealed in parallel to her present.

The creatives behind this incarnation of Violet include direction by award-winning director Shuntaro Fujita, choreography by Cressida Carré, set design by Morgan Large, costume by Jonathan Lipman, lighting by Howard Hudson, sound by Andrew Johnson, and music direction by Dan Jackson.

Stopping just short of calling it uplifting, Violet delves into to some serious territory. Ultimately the musical is a lesson in learning to love oneself in spite of our imperfections.

Violet’s journey was always going to be a failure in terms of obtaining a cure for her physical scars, but what her trip does do is go some way to healing the emotional wounds that have plagued her since the accident – through compassion and courage Violet comes to understand that beauty, really only is skin deep.