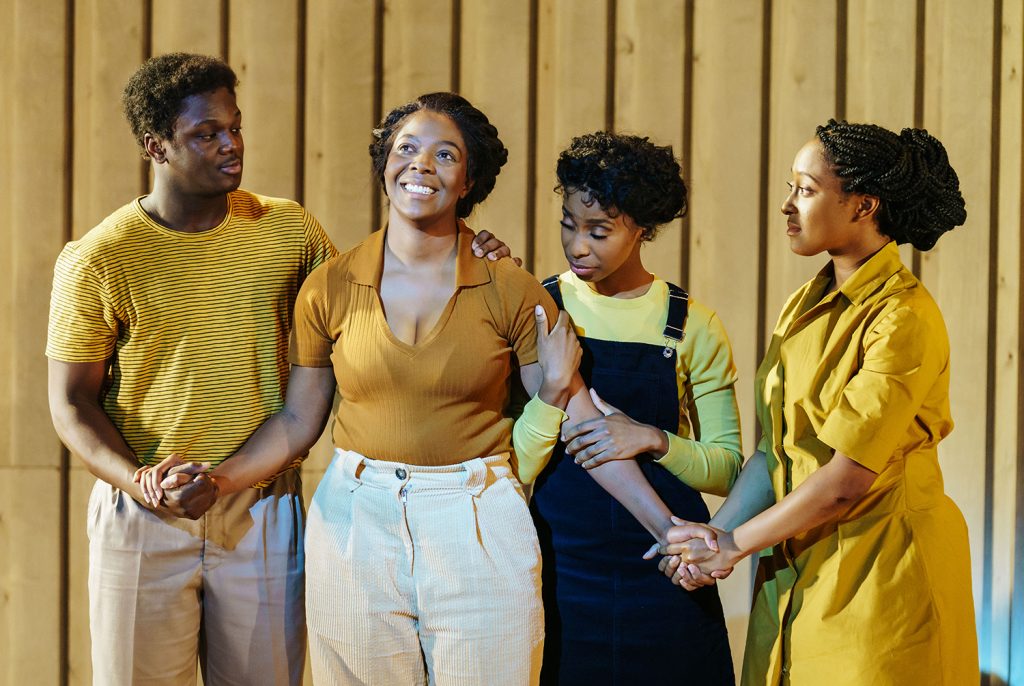 The cast of The Color Purple: Photography by Manuel Harlan

Book: Marsha Norman, based on the novel by Alice Walker

The Color Purple marks the first co-production between Leicester Curve and Birmingham Hippodrome and it’s safe to say this inaugural collaboration is a hit. The production marks a cornerstone of Birmingham Hippodrome’s 120th anniversary celebrations and is arguably the most anticipated theatrical even of the year. A highly charged, emotional and unforgettable story told over the course of 40 years is a sucker punch to the gut, a feast for the eyes and a treat for the ears.

Adapted from Alice Walker’s 1982 Epistolary novel, The Color Purple follows tormented heroine Celie, as she navigates a life of elation, desolation, anguish and hope in her own personal awakening to discover her unique voice in the world. Living in a largely patriarchal society, her life is plagued by abuse, cruelty and loss and she is systematically stripped of her innocence, hope and independence. Despite the abolition of slavery 40 years before, times are still incredibly tough in the racially divided Deep South with violence and brutality commonplace.

The production is set against a powerful score drawing inspiration from jazz, ragtime, gospel and blues. This landmark musical is directed by Tinuke Craig, winner of the 2014 Genesis Future Directors Award. Craig’s direction is visionary and her respect and love for Alice Walker’s text is evident. Her directional choices have served to ensure the story is served with due care and attention while not shying away from the trauma Celie faces. Alex Lowde’s fluidic set designs are simple and effective and arrive around Celie who is rarely off stage. The set and costume designs are suggestive of the periods spanned over the piece rather than completely historically accurate, which serves to enhance the style.

The component parts of the production seamlessly come together to create an incredibly slick and organic piece of theatre. The entire ensemble cast are nothing short of phenomenal and there are absolutely no weak links. The vocal range and prowess on show is extraordinary and elevates the powerful score to the next level.

T’Shan Williams takes on the role of Celie and is utterly mesmerising in her incarnation. Her vocal placement elicits goosebumps and her vulnerability in the role is palpable. Williams gives everything to this role and her commitment to the character is astonishing. She perfectly articulates Celie’s heartbreak, pain and resigned acceptance of the abuse and cruelty she faces on a daily basis. Her performance of Celie’s defining number I’m Here is stirring, empowering and delivered to perfection.

Joanna Francis is incandescent as the free-spirited, non-conforming feminist Shug Avery who captures Celie’s heart. Francis and Williams’ chemistry is beautifully believable and the development of Celie and Shug’s relationship builds organically and authentically culminating in their powerful and highly emotional duet What About Love. After a life of being told she’s ugly, this moment brings a tear to the eye and a lump to the throat.

Singling out individual performances is almost unfair; all members of this cast bring so much to this production Karen Mavundukure is a revelation as the larger than life Sofia who refuses to be kowtowed by men. Mavundukure is blessed with an incredibly rich and soulful voice and her performance of Hell No, is a deafeningly powerful number about female empowerment. Delivered note perfectly the number could almost serve as a parallel to the #MeToo movement. Mavundukure bounces beautifully off Simon-Anthony Rhoden as Harpo with the two providing some of the more light-hearted moments of the show.

Ako Mitchell provides a solid turn at the thoroughly unpleasant Mister, Celie’s violent and abusive husband. Mitchell again provides a wonderful journey for his character from immense cruelty to ultimate redemption. His solo of Mister Song is rich and commanding articulating the conflicted Mister’s inner turmoil.

Although The Color Purple’s themes are difficult to stomach, they are still wildly relevant for a 2019 audience thanks to the gargantuan inequalities and persecution that still exists in today’s society.

The Color Purple is quite extraordinary and it will be a travesty if the show doesn’t tour or receive a West End transfer. It demands and deserves a wider audience and everyone should see it. This is a show that takes an audience on a literal roller-coaster of emotions and ones thing’s for sure, it’s impact is long lasting. A thoroughly deserved, instantaneous standing ovation.