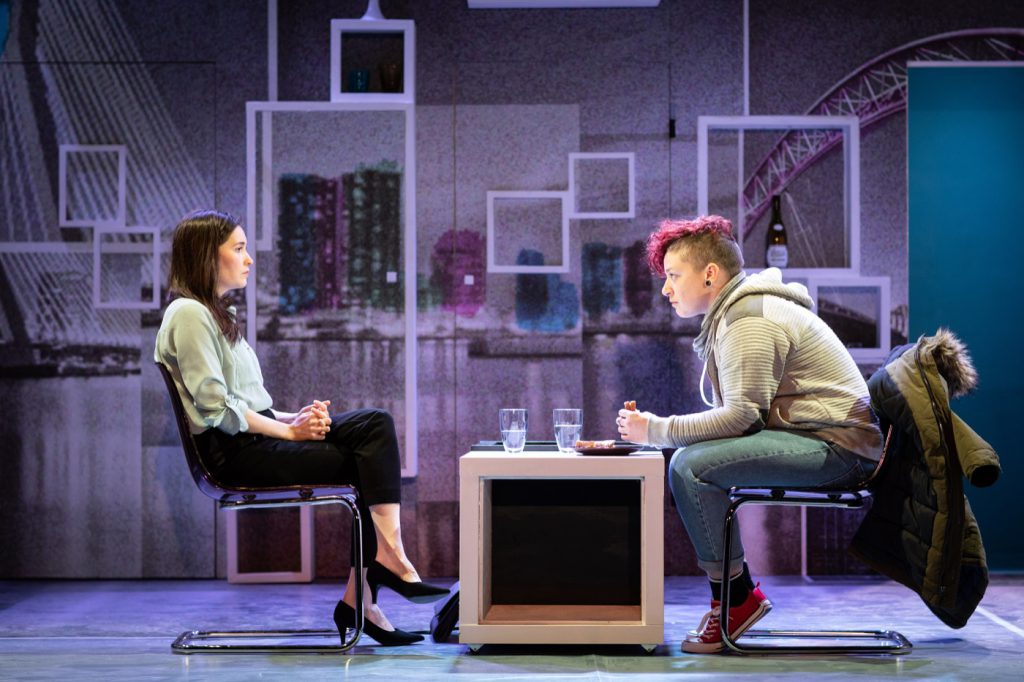 “No, Alice, I don’t want to become a man, I just want to stop trying to be a woman”

It‘s always a treat when an award-winning production embarks on a UK tour, allowing audiences outside of London to enjoy some of the finest theatre the UK has to offer. This week Jon Brittain’s critically acclaimed play Rotterdam, a bittersweet, heartfelt and touching comedy about gender and sexuality arrives in Wolverhampton for a limited three-night run.

Alice and Fiona live in Rotterdam, it’s New Year and Alice has finally plucked up the courage to compose an email to her parents telling them she’s gay. Before she can send the email her girlfriend Fiona drops a monumental bombshell of her own revealing that she has always identified as a man and that he wants to start transitioning immediately.  As Adrian begins his transition, both he and Alice are challenged to redefine their own identities and accept their new normal.

Inspired by the struggles and journeys of several friends, Brittain wrote Rotterdam to allow others to see themselves and their stories represented on stage. Directed by Donnacadh O’Brian, Rotterdam originally opened at Theatre503, Battersea in 2015 before transferring to Trafalgar Studios in 2016 and winning Outstanding Achievement in an Affiliate Theatre in the 2017 Olivier Awards. It transferred to the Arts Theatre in 2017.

The show did and continues to break new ground not only in terms of its subject matter, but through its commitment to diverse casting of non-binary and trans actors. It’s testament then to Brittain as to exactly how sensitively this play is handled. It is incredibly unapologetic, witty and sharp, with highly charged scenes that do not hold back. Despite the seriousness of the subject, natural humour is peppered throughout the piece helping to provide a truthful representation of how the characters respond to their situations which builds organically and doesn’t feel manufactured.

The cast are phenomenal, although their links to each other are somewhat contrived the four of them come together bringing the piece to life with a believable and authentic chemistry, with each delivering incredibly nuanced performances.

Lucy Jane Parkinson is outstanding as Fiona / Adrian. First introduced as Fiona, Parkinson’s performance provides the perfect balance of rugged northern confidence and a vulnerability that betrays inner turmoil as Adrian struggles to say the words he has never been able to find.

Parkinson’s commitment to this role is astonishing; she takes the audience on Adrian’s journey through a rollercoaster of raw emotions. From jubilation and euphoria after acknowledging his truth, to an agonising realisation that through (outwardly) becoming the person he always has been inside, he may lose the one thing he loves the most. Watching Adrian unravel at this point having fought so bravely to be himself is utterly heartbreaking and testament to Parkinson’s incredible performance.

Bethan Cullinane is charming and endearing as the uptight and closeted Alice. Her journey is as profound and as important as Adrian’s own and it’s ultimately down to Alice whether or not Adrian’s transition pushes them apart or brings them closer together. Cullinane perfectly articulates Alice’s conflicting emotions, both in terms of questioning her own sexuality as a result of Adrian’s revelation and her pain at watching the woman she loves disappear before her and what this means for their future.

Elijah W Harris is a delight as Josh, Adrian’s brother, and Alice’s ex-boyfriend. Although the character is somewhat underdeveloped, Josh provides some of the more light-hearted moments of the play. He also acts as a conduit to the couple, helping them each understand the other’s point of view.

Ellie Morris provides a solid turn as Alice’s thoroughly unlikeable and immature colleague Lelani. A party girl with no filter she provides the ultimate paradox to Adrian and serves as forbidden fruit for Alice. Openly gay and incredibly self-assured, Lelani offers Alice an escape from dealing with Adrian’s transition. From encouraging her to smoke weed to walk on a frozen canal and set off fireworks, Lelani allows Alice to shake off her inhibitions and her head is turned.

Ellan Parry’s simple box design staging is complimented by Richard Williamson’s bright and vivid lighting design, which subtly replicates the pink and the blue of the Trans Pride flag. Techo / house music pumps (loudly) through the auditorium through the scene changes, although a little long, add to the intensity of the piece.

Wolverhampton Grand is one of the largest venues on the tour and the set does look dwarfed on the stage, it would be interesting to see the piece in a more intimate setting. That said the environment doesn’t detract from the outstanding performances of the cast who at times are mesmerising.

For anyone struggling to find their identity or their own place in the world, representation really matters. Brittain’s main motivation for writing Rotterdam was “to create a space where characters could go on similar journeys – reflecting the lives of people in their position” and he achieves this in abundance.

Rotterdam brings LGBTQ+ characters to the fore, but without agenda and in the end Rotterdam is a poignant story of accepting those we love for who they are and not who we want them to be – an absolutely startling piece of theatre.