REVIEW: Madagascar the Musical – A rip-roaring night out for the whole family 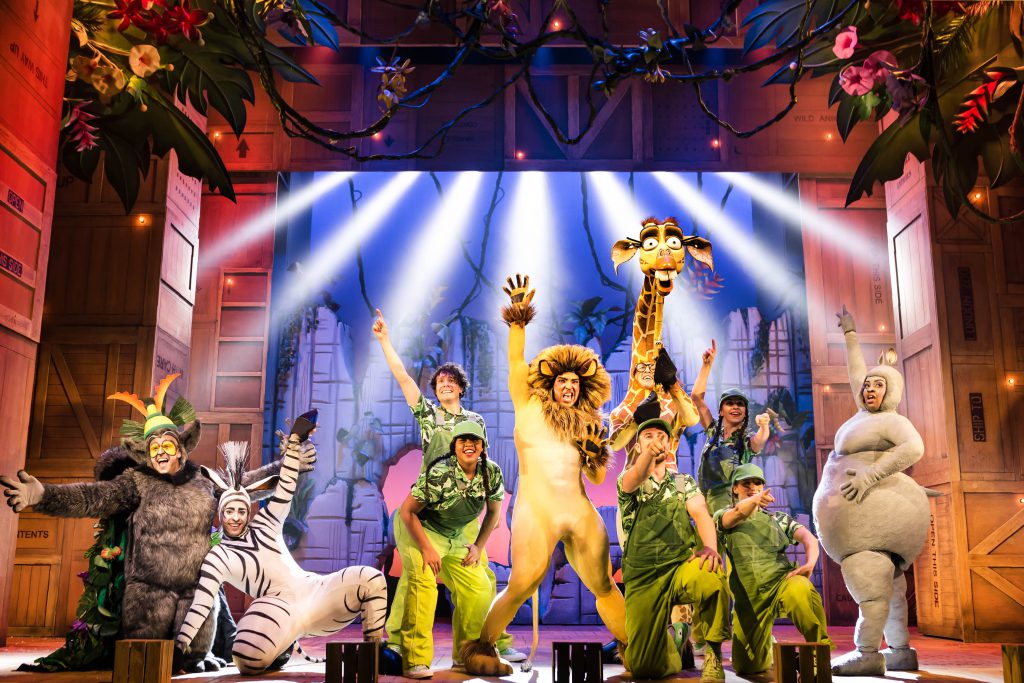 With face painting in the foyer and Dudley Zoo’s mascot Monty the Monkey greeting the swathes of excited children (and adults), the scene was well and truly set for the opening night of Madagascar the Musical at Wolverhampton Grand Theatre.

Based on the hugely successful 2005 Dreamworks Animation motion picture of the same name, Madagascar tells the story of Central Park Zoo animals Alex the lion, Marty the zebra, Gloria the hippo and Melman the giraffe who unexpectedly find themselves stranded on the island of Madagascar and forced to adapt to life in the wild. The musical’s plot stays true to the original film (with a few more jaunty numbers thrown in) and transfers seamlessly to the stage.

Dreamworks are no strangers to adapting their films for the stage having enjoyed widespread success, both in the UK and in America with Shrek the Musical. The recipe here is similar and thanks to a combination of clever puppetry, vibrant stage design, incredible costumes and the direction of Kirk Jameson, the Dreamworks high standard is maintained.

Produced by Selladoor Family and Hartshorn-Hook Productions, the cast is led by 2016 X-Factor champion Matt Terry in the role of Alex.

Terry produces a charming and assured performance as the self-styled ‘King of New York City’ who basks in his celebrity as the zoo’s mane (pun intended) attraction.

Antoine Murray-Straughan is an utter delight as Alex’s best friend Marty who longs to be in the wild. Thanks to the shenanigans of the zoo’s resident shifty penguins, he realises his dream as the animals break out of captivity and end up on the island of Madagascar (via Broadway and Times Square).

Timmika Ramsay is a wonderful Gloria who provides some of the strongest vocals of the night. She has an incredibly strong voice which is pitch perfect and suits the character of Gloria to a tee.

The quartet is completed by Jamie Lee –Morgan who is hilarious as the hypochondriac, germaphobe Melman. Lee-Morgan’s portrayal of the worrisome giraffe is made all the more amusing through his costume which requires his long neck to be controlled by a stick.

The chemistry between the four principals is evident as clearly revel in the fun and freedom of their characters. They execute Fabian Aloise’s lively choreography with aplomb, effortlessly maintaining the energy throughout the duration of the show.

As strong and as vibrant as the four main characters are, they are upstaged in droves by their own Resident Director, Jo Parsons who plays the mischievous King Julien. Much like Shrek the Musical’s Lord Farquaad, Parsons’ costume requires him to scuttle across the stage on his knees, which adds to the already overflowing comedy value of the character who is perhaps the most synonymous with Madagascar.

We don’t see him until Act 2 but it is worth the wait. He bursts on to the stage delivering Madagascar’s signature number ‘I Like to Move It’ (supported brilliantly by the wider ensemble) with such gusto that it almost lifts the roof off the theatre. You only have to look around the auditorium at the young children who are on their feet/dancing in their seats to appreciate the clever delivery of the number.

Madagascar the Musical is a relatively short production and at 1 hour 40 minutes long, it clearly caters to a young demographic. However, the short duration is not detrimental and at no point does the show feel rushed. It is also just as much fun for the adults as it is for the kids.

Madagascar the Musical is a perfect evening of theatrical fun and frolics that does what it says on the tin. Trot, gallop, or waddle to Wolverhampton Grand this week and join in the fun while you can.