REVIEW: How We Begin – A refreshing, beautifully written & flawlessly performed piece of theatre 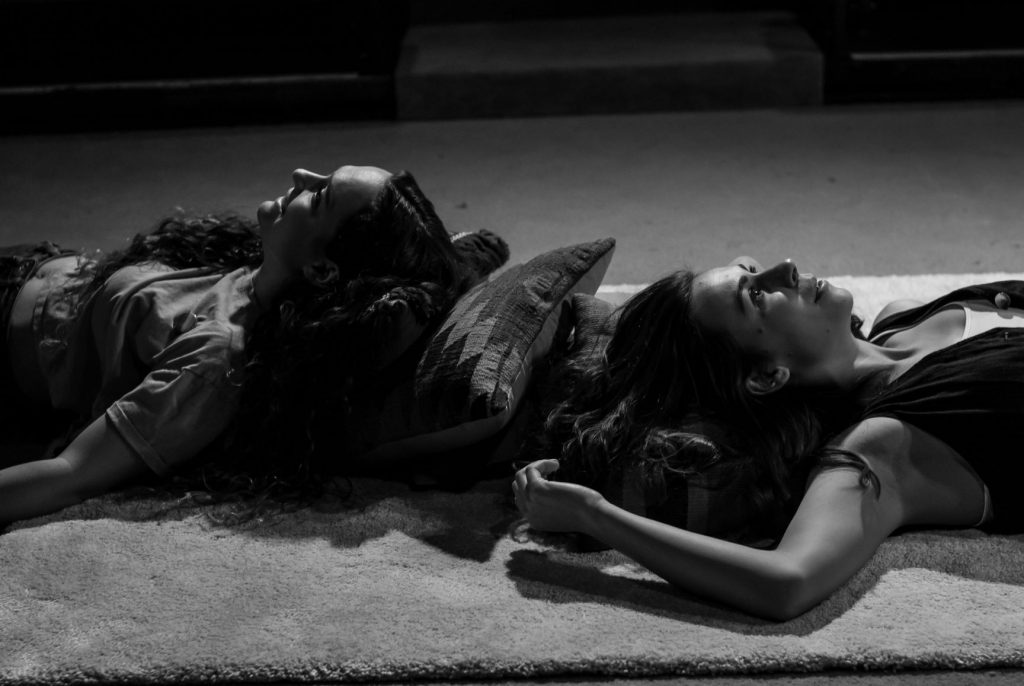 Every once in a while a staggeringly good piece of writing comes along, it’s rare but it happens, as is the case with Elisabeth Lewerenz’s new play How We Begin. In a time where sexual fluidity and exploration of identity is embraced and championed, theatre is awash with plays and musicals that explore those themes, however, those narratives are generally more male-led. Angels In America and The Inheritance have catapulted gay-centric theatre into the mainstream and despite this push female-led stories remain very much on the fringes.

How We Begin is a tender, modern and honest portrayal of what it means to fall in love with someone you shouldn’t. Helen and Diana have been best friends since Fresher’s Week. Three years on they are settled and sorted in their respective lives, both professionally successful, Diana is in a serious relationship with a man and Helen is openly exploring her bisexuality. Things are pretty plain sailing until the two realise they have feelings for each other that aren’t strictly platonic. Unable to deny their attraction they embark on an affair as they try to navigate the inevitable hurdles they face and how this shift in their relationship will ultimately affect their friendship.

The script is incredibly tight and Lewerenz is a wonderfully accomplished writer, in fact, it’s hard to believe this is her debut play. Laugh out loud funny in places it’s also incredibly romantic, poignant and touching. Under the direction of Elizabeth Benbow, the performances are as slick as the writing. Emma Lucia (Diana) and Talia Pick (Helen) bring believable and authentic chemistry to the piece that has the audience fully invested in their relationship from the get-go. What is incredibly refreshing about How We Begin is that the piece doesn’t rely on titivation or exploitation to explore the relationship between the two women; in fact, the couple only share one on-stage kiss. The evolution of their relationship is so cleverly driven through the writing and the actor’s interpretation of it.

For a fringe theatre, The King’s Head is blessed with a roomy stage which director Benbow uses to great effect. Diana and Helen are often at opposite sides of the stage which acts as a beautiful metaphor for their struggle to be together and the unavoidable gulf that separates them. The two dance around each other, the rapid and sharp dialogue at times like a tennis match as they bicker and flirt and recount texts that were never sent and words that were never spoken. It’s not all about the couple though; the audience is treated to a wonderful coming out scene where Helen, who in the wake of her brother’s engagement, clumsily announces her bisexuality to her bemused family which yields applause from her elderly grandfather.

The ending might not be wholly satisfactory, but at least neither of them die which is often a trope that befalls queer female characters. It’s refreshing to see a wonderful piece of theatre such as How We Begin bucking that trend. This gorgeous little play is only on for one more night, if you are in the vicinity of the King’s Head Theatre, get yourself down there. It will be a travesty if this play doesn’t get further exposure as it deserves a much wider audience. It was also a delight to see a diverse audience in the packed theatre, yes it’s LGBTQ+ representation but that doesn’t mean anyone outside of the community will enjoy it any less.

Refreshing, beautifully written and flawlessly performed, How We Begin is a triumphant debut play from the all-female production company Surfacing Act Theatre and it will be a joy to follow their projects going forward.